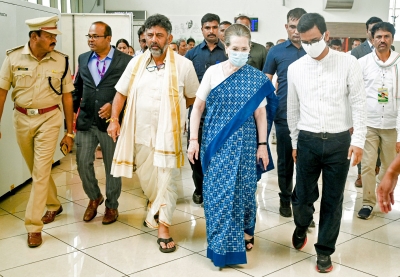 Shivakumar said Sonia Gandhi is taking part in the Bharat Jodo Yatra on October 6 in Karnataka.

He maintained that a two-day break has been taken by Rahul Gandhi as per the requests made by Siddaramaiah in the backdrop of Dasara and Navratri festivities in the state.

“We have made alternate arrangements for Sonia Gandhi in Mysuru. If the weather condition is good in Madikeri she will visit the place, otherwise, she will stay back in Mysuru,” Shivakumar said.

Asked about the criticism by the BJP of Bharat Jodo Yatra, Shivakumar said Rahul Gandhi did not stop his speech even amid heavy rains on Sunday.

“Whether it is scorching sun or biting cold, we will continue the padayatra for the integrity of the country,” he said.

However, Congress insiders said that the top leadership has taken a decision to avoid the Madikeri trip fearing stiff opposition and ruckus by Hindutva activists.

Opposition leader Siddaramaiah’s vehicle was hit with eggs and he was shown black flags in Kodagu district during his visit to the flood-hit areas. The Hindu activists vented out their ire on Siddaramaiah for launching celebrations on Tipu Jayanti.

Karnataka’s Congress leadership worries that if black flags are shown to Rahul Gandhi and Sonia Gandhi, it would embarrass the party and dent the goodwill which is being created by Bharat Jodo Yatra, sources stated.