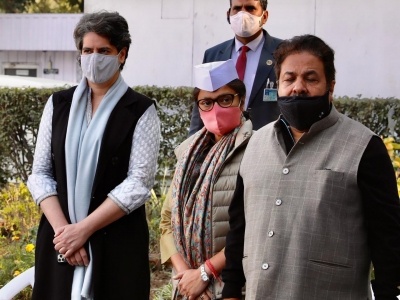 Speaking to the media after the party foundation day celebrations, Priyanka Gandhi slammed the government for calling the farmers’ agitation a “political conspiracy”.

She said: “Soldiers protecting the country’s borders are the sons of farmers and the government should understand that the farmers are the ‘annadatas’ (food givers) of the country.”

However, she remained silent on the questions about the whereabouts of her brother and Wayanad MP Rahul Gandhi.

Sonia Gandhi has been avoiding the public appearances for the last few months, while reportedly Rahul Gandhi left for Italy on Sunday morning.

Speaking to the media, senior Congress leader Randeep Singh Surjewala said Rahul Gandhi was not in the country but Sonia Gandhi was present.

He said that as a party worker Rahul Gandhi performs all the duties assigned to him.

“Rahul Gandhi is on a short personal visit to see his ailing grandmother. He is not on a holiday and also to see his grandmother,” he said.

Surjewala, while slamming the BJP, said the BJP should not comment on the personal visits of someone.