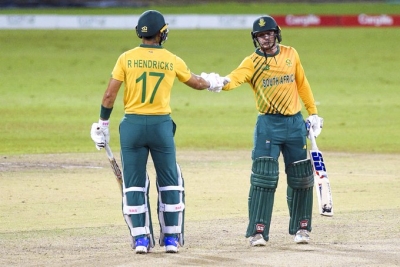 Hendricks struck an unbeaten 56 off 42 deliveries while de Kock blasted 59 off 46 deliveries as South Africa, chasing Sri Lanka’s modest total of 120/8, reached 121 for no loss in 14.4 overs to romp home to a massive victory.

It was a clinical performance by the visitors both with the ball and bat on Tuesday. They first restricted the hosts to 120/8 with Bjorn Fortuin and Kagiso Rabada claiming two wickets apiece. Fortuin finished with 2/21 while Rabada had 2/23 as South Africa made early inroads and kept taking wickets at regular intervals. Kushal Perera, making a return from an injury, top-scored with 39 while Chamika Karunaratne struck an unbeaten 24 off 19 balls towards the end giving the innings some sort of respectability.

Having won the toss and elected to bat, Sri Lanka were off to a quick start, but the loss of three wickets in three consecutive overs derailed their innings in the Powerplay. Rabada, who has not been in the best of form lately, accounted for the wickets of Avishka Fernando and Bhanuka Rajapaksa while Quinton de Kock completed a smart stumping off Bjorn Fortuin to dismiss Dhananjaya de Silva.

In reply, the South African openers – Quinton de Kock and Reeza Hendricks raced off the block in the run chase. The Sri Lankan bowlers tried their best to disturb the rhythm but simply could not get the same perches off the wicket as their South African counterparts.

After 8 overs, the Proteas were cruising in the run chase, with their score at 64/0, requiring 57 runs off only 72 deliveries. Hendricks and de Kock were both looking comfortable at the crease with scores of 29* each. The pair further put their foot down, with both of them registering solid half-centuries in a performance which will give them a lot of confidence ahead of the 2021 ICC Men’s T20 World Cup.

Given the series was already wrapped up, both teams decided to ring in changes for the final game. The hosts made three changes to the team that lost the second T20I by nine wickets with Dinesh Chandimal, Charith Asalanka, and Praveen Jayawickrama making way for Avishka Fernando, Kamindu Mendis, and Lahiru Madushanka. The Proteas decided to go with an extra all-rounder, bring in Wiaan Mulder to replace Anrich Nortje.

Revathi chose Vishal Jethwa as she felt he would understand his...