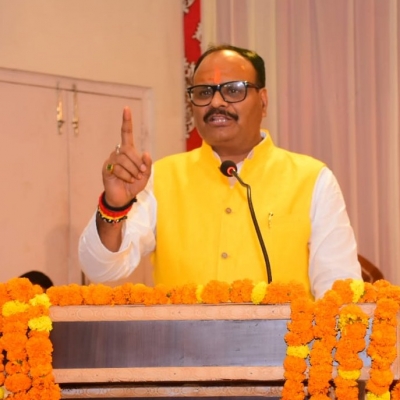 SP used Muslims like bay leaf in Biryani: UP DyCM

In an attempt to woo Pasmanda Muslims, Uttar Pradesh deputy Chief Minister Brajesh Pathak has said that the Samajwadi Party government had used the Muslim community ‘like ‘tejpatta’ (bay leaves) in biryani’.

Lucknow: In an attempt to woo Pasmanda Muslims, Uttar Pradesh deputy Chief Minister Brajesh Pathak has said that the Samajwadi Party government had used the Muslim community ‘like ‘tejpatta’ (bay leaves) in biryani’.

Pathak , while addressing a meeting of the Pasmanda community in Rampur on Saturday evening, said, “Congress, SP and BSP carried out misinformation campaigns between Hindus and Muslims to get votes. The previous government used you like ‘tejpatta’ in biryani which is thrown out after the dish is cooked.”

The Rampur seat, a stronghold of SP leader Azam Khan, fell vacant after Azam was disqualified as MLA.

Pathak further said, “The Opposition has created a deep divide between Hindus and Muslims only for winning votes. The BJP government has not taken any decision in which people from the Pasmanda community have not been included. They have benefited from every scheme of the BJP government.”

Lashing out at the previous governments, he said that everyone was aware of the condition of the state before 2017 and how it had changed since then.

He said that earlier, police stations were under the control of mafia and dacoits. BJP established the rule of law once again in the state and the doors of Lucknow are always open for people from Rampur.

Warning people that ahead of the elections, leaders of other parties would try and spread misinformation among the people, Pathak said that Prime Minister Narendra Modi is the only leader who has given the slogan of ‘Sabka Saath, Sabka Vikas aur Sabka Vishwas’.

Pathak added: “The double-engine government of BJP has worked without discrimination for everyone. The Prime Minister said that he would work to raise the standard of every community and you should all commit to contributing your bit to change the face of Rampur, as per his vision.

By-election to the Rampur Assembly seat is due to be held on December 5.