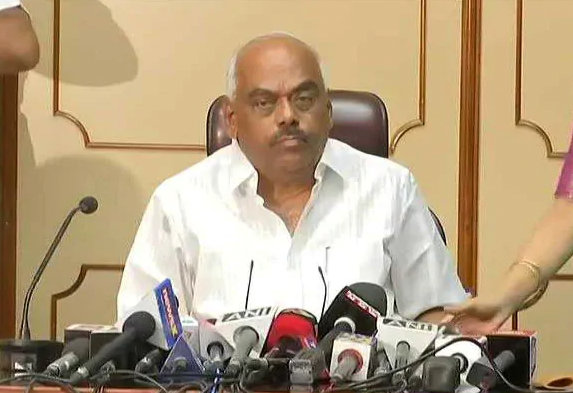 Bangalore: Three rebel lawmakers who withdrew support to the Karnataka government and switched sides, have been disqualified by Speaker KR Ramesh Kumar. “R Shankar of Ranebennur has incurred disqualification,” the Speaker announced at a press conference this evening amid suspense over the fate of the 15 rebel lawmakers of the coalition government of the Congress and HD Kumaraswamy’s Janata Dal Secular.
All 15 resigned earlier this month, bringing down the coalition government, which lost the test of strength in the assembly on Monday.

If the Speaker does not accept the resignations, the lawmakers would remain members of the assembly and the strength of the house will remain 225, including one nominated member. In such a situation, the majority mark remains at 113. The disqualification of the one Independent legislator does not affect the numbers.

The BJP, which currently has 105 members, is not inclined to form a minority government, party spokesman G Madhusudan had indicated.

In such a situation, placing the state under President’s Rule is one of the alternatives for the Governor, he had indicated.

“If the Speaker takes longer time to accept or reject the resignations of the rebels, the Governor (Vajubhai Vala) may recommend President’s rule in the state, as we will not like to stake claim to power in such a situation,” IANS quoted G Madhusudan as saying.

COMMENT
If the resignations of the rebel lawmakers are accepted, the strength of the house comes down to 105. But till the rebels are re-elected as BJP legislators, the BJP will be compelled to run a minority government.