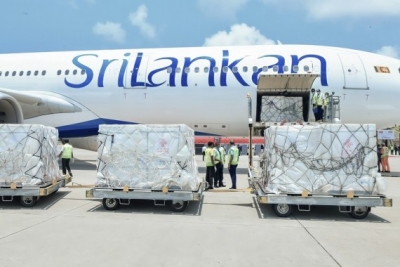 Colombo: Sri Lanka’s Health Ministry on Sunday received 2 million doses of Sinopharm vaccines from China, leading to a total of 7.1 million Sinopharm doses arriving in the country since March.

Meanwhile, 300,000 and 500,000 doses will be dispatched to Kalutara and Gampaha Districts respectively.

According to official statistics from the Health Ministry, nearly 3 million people have received the Sinopharm vaccines in Sri Lanka to date, making it the leading vaccine to be administered among the general public.

Out of the nearly 3 million people jabbed, over 1 million have received their second injections as well, Health Ministry statistics showed.

The President said the number of vaccines that will be received in the month of July will be made available to the public, giving priority to the districts identified as high-risk areas for the spread of Covid-19.

Sri Lanka is presently facing a third wave of the Covid-19 virus with authorities warning of a spread of the Delta variant.

The country has to date recorded 273,031 patients since the first local patient was detected in March last year, while 3,467 deaths have been reported.