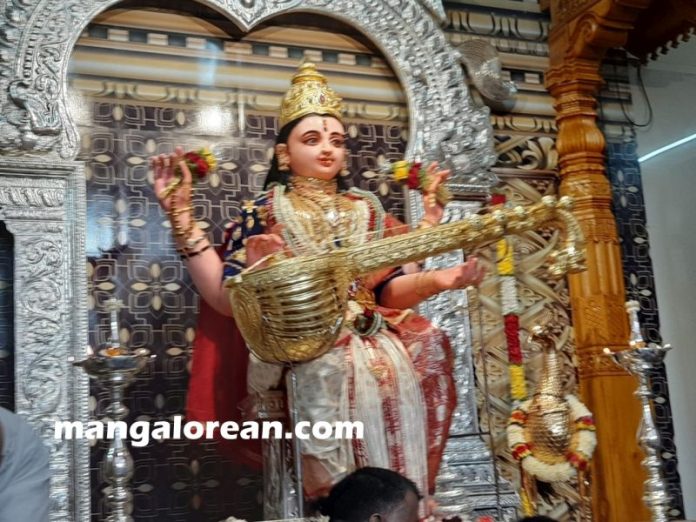 Mangaluru: The 100th year of Sharadotsav was ritualistically observed at the Acharya Mutt housed within the premises of the Sri Venkataramana Temple, Car Street in Mangaluru. Hundreds of devotees participated in the procession of ‘Horekanike’ (offerings), taken out from Nehru Maidan to the temple on September 25. Idols of Goddess Sharada were taken out on decorated palanquins to the temple. The Horekanike was inaugurated by MLA Vedavyas Kamath, DCP Anshu Kumar, ACP Geetha Kulkarni and ACP P A Hegde; former MLA J R Lobo, former MLC Ivan D’souza, among others. 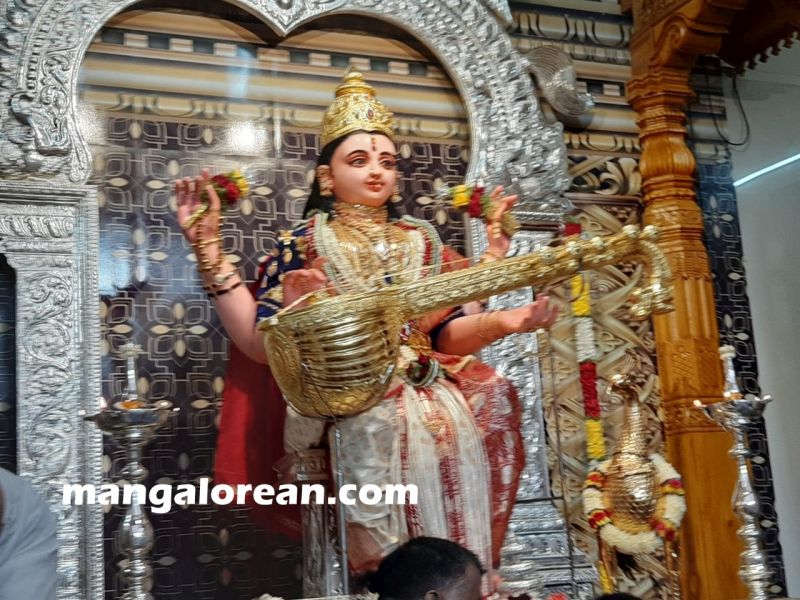 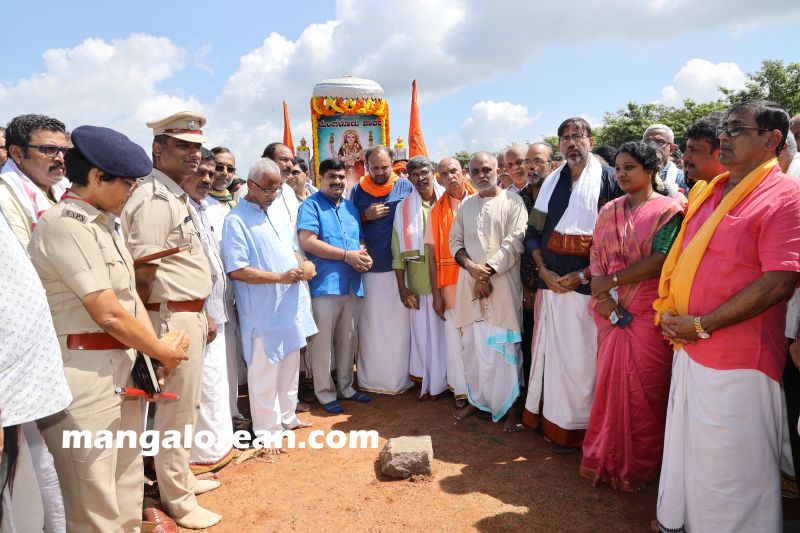 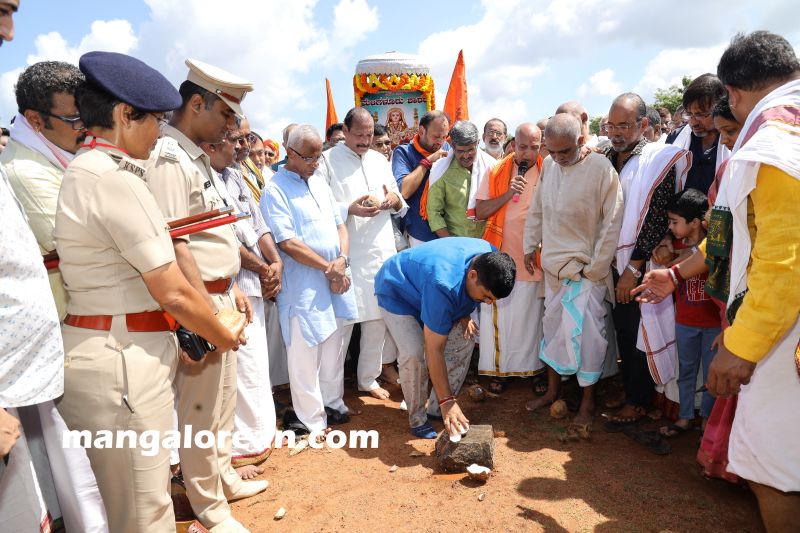 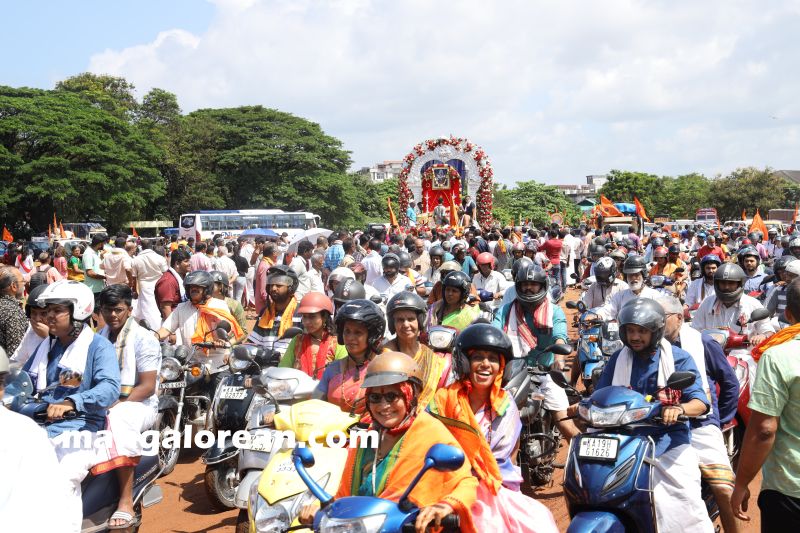 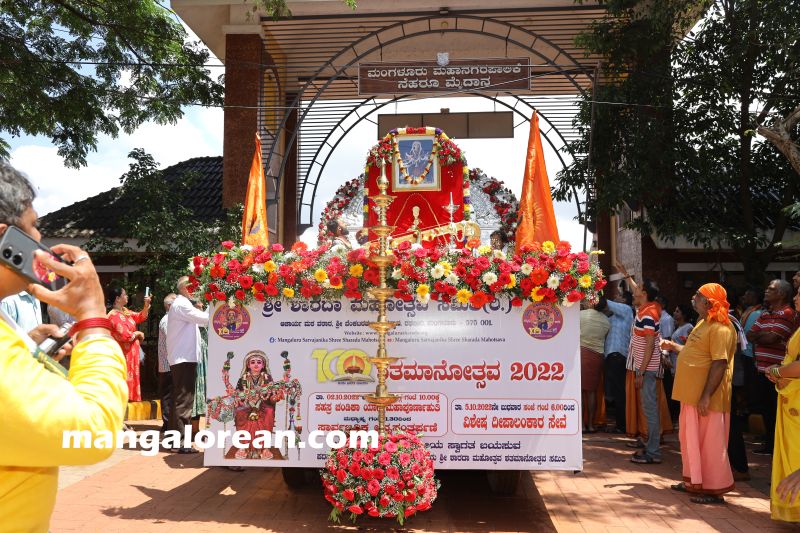 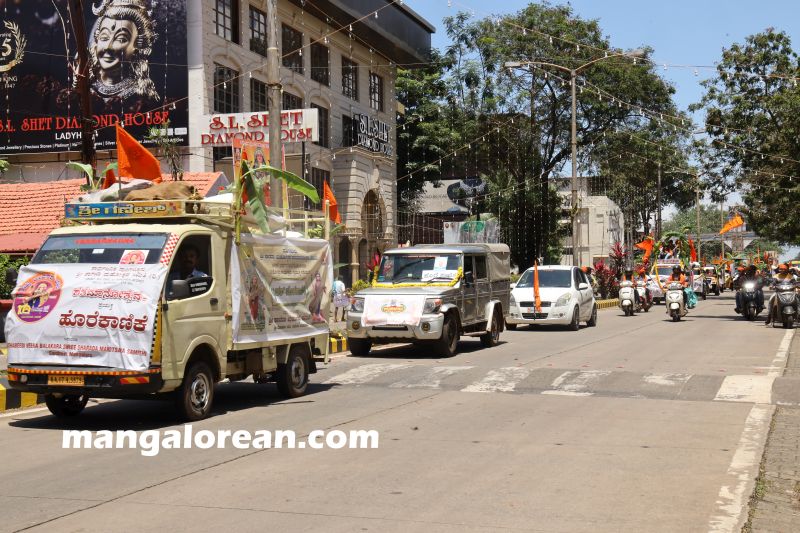 As part of Centenary Celebrations, Sri Venkataramana Temple, Car street in the City is all geared up for the ‘Mangaluru Dasara’ Celebrations commencing from 26 September till 6 October 2022. A Muslim family in Varanasi, Uttar Pradesh has made the green silk saree with gold embroidery for the Goddess Sharada idol to be installed at Acharya Math premises of Sri Venkatarama Temple. On the day of Shobhayatra on 6 October, the Goddess will be draped in this beautiful saree worth around Rs 8 Lakhs. 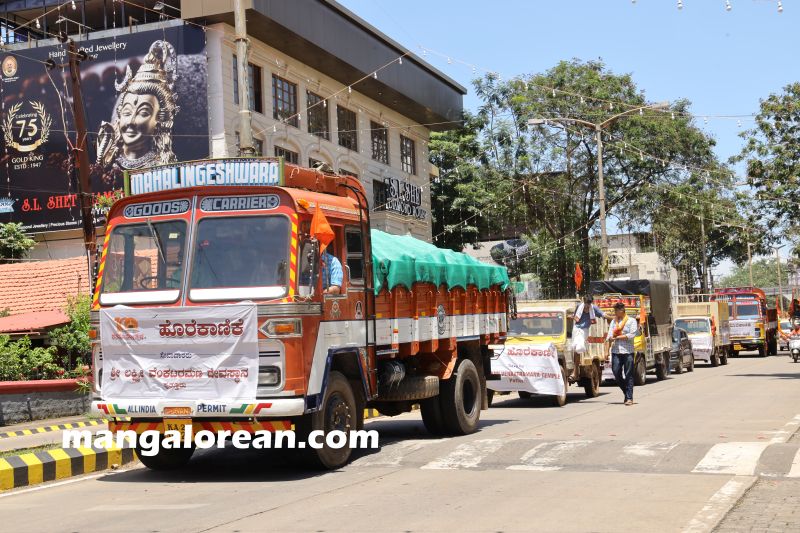 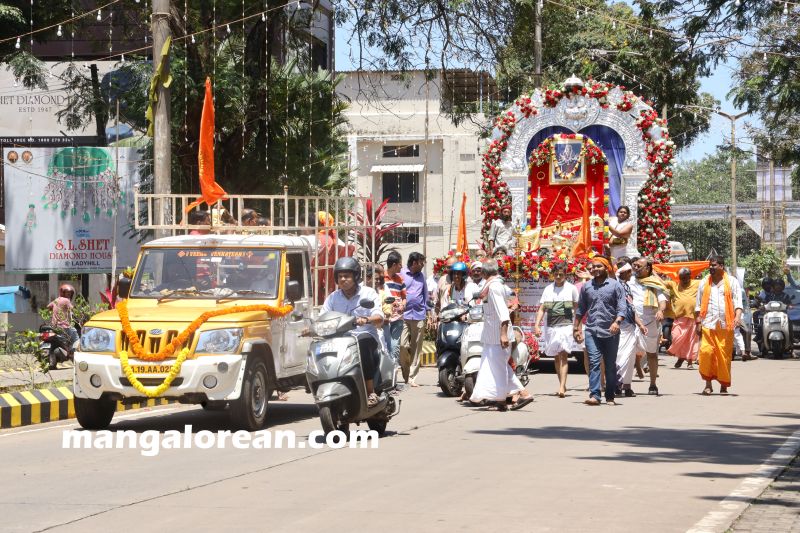 The saree is sponsored every year by Sudheer Pai of Kulyadikars textiles. The embroidery is handmade by the fifth-generation weavers of a Muslim family in Gyanvapi. Though the goddess is usually adorned with a Benares silk saree with silver zari (thread made of silver) which costs around Rs 2 lakh, this year the sponsor decided to weave golden zari embroidery work for the saree, as this happens to be the centenary year of Sharada Mahotsava, Neereshwalya said. 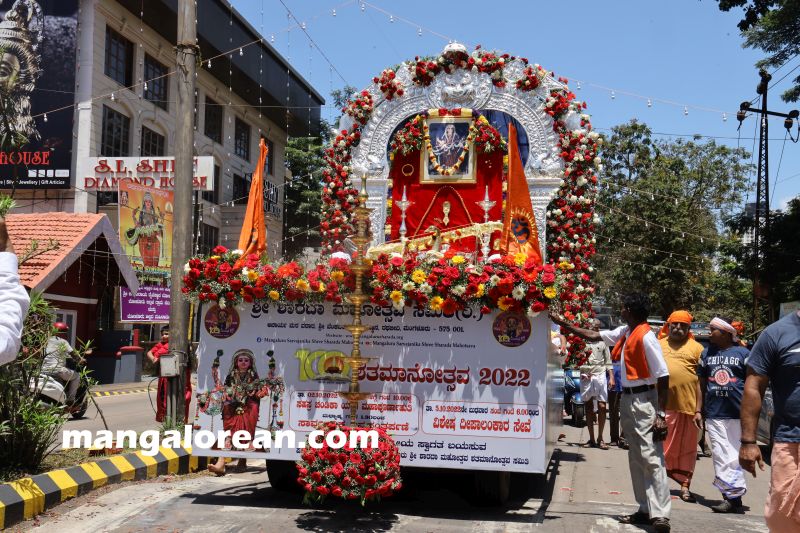 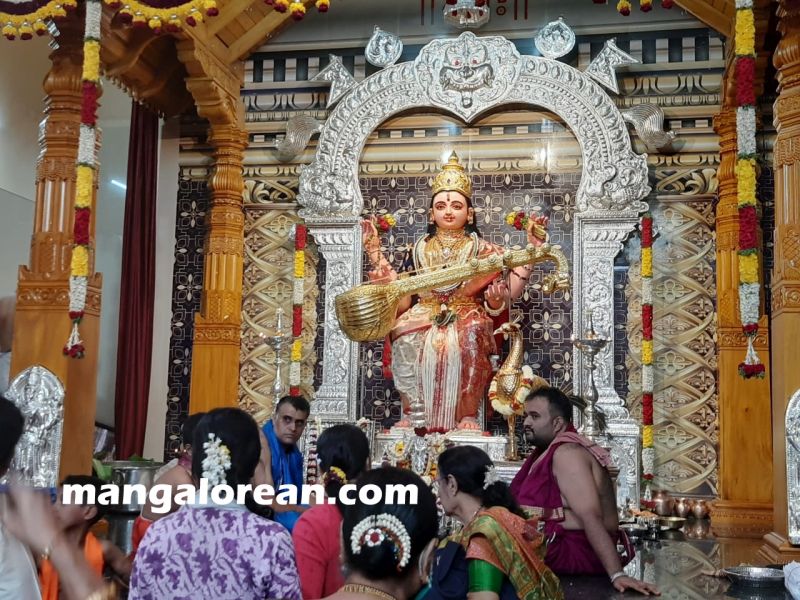 Sharada Mahotsava was started in 1922 to bring together people during the independence movement. Devotees and well-wishers have donated a veena and peacock made of gold this year. The goddess will be seen carrying the veena and the peacock placed next to the idol. A silver pedestal will also be dedicated to the goddess during the occasion. 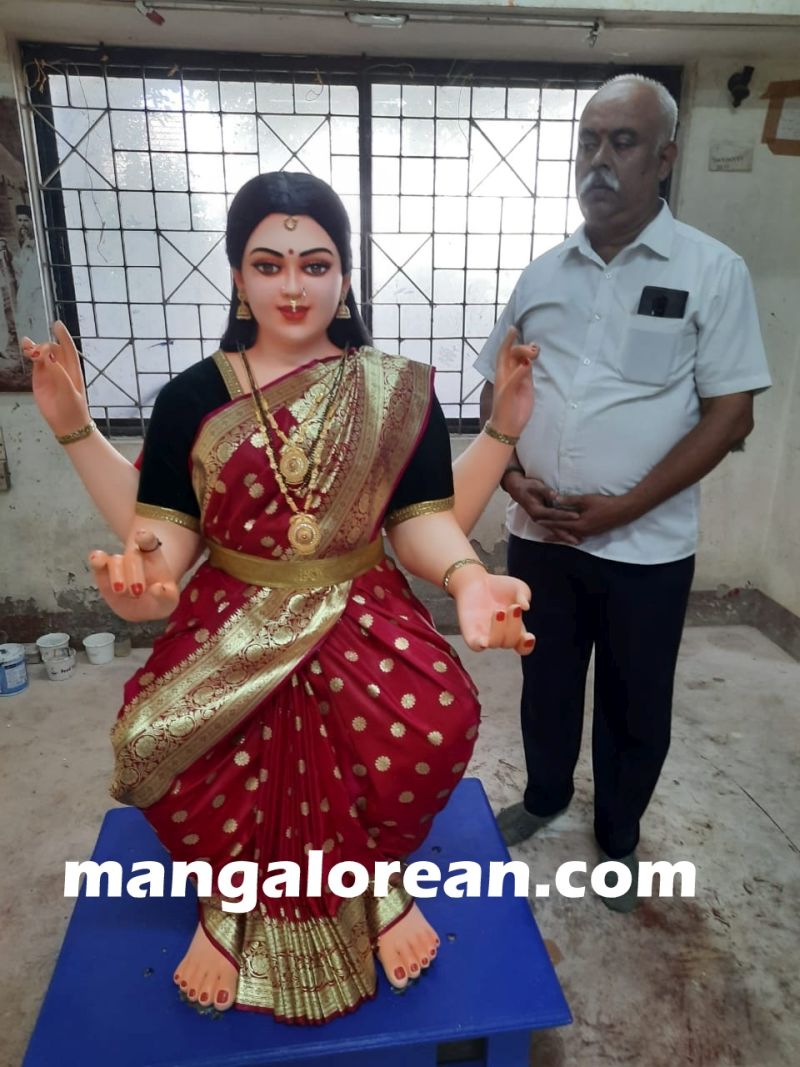 Vinayak Shet of Aditya Screen & Signs, Car Street, standing next to Goddess Sharada made by him, worth Rs 25,000 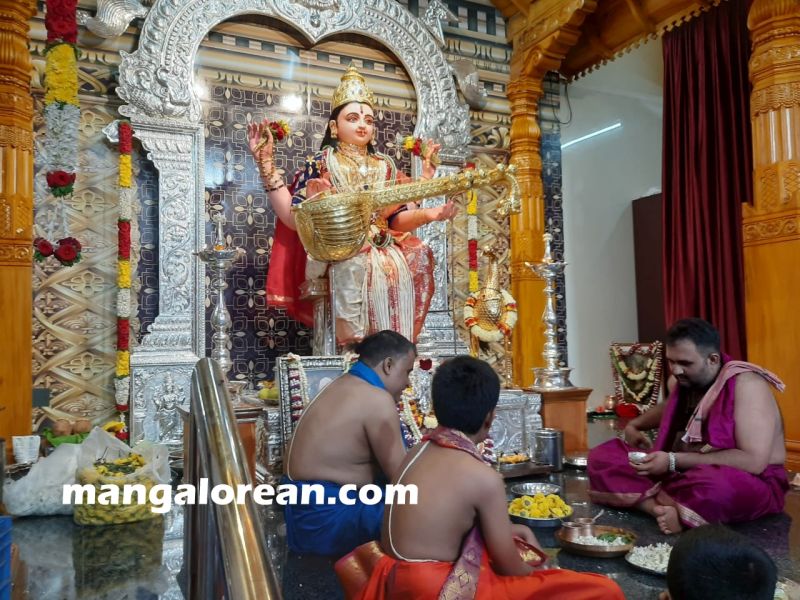 The Goddess will be placed in a wooden Mantapa with intricate carvings, that has been renovated at Rs 10 Lakhs. The idol was installed today (26 September) with ‘Saraswathi Alankara’. The Goddess will be dressed differently on all days. On the last day, she will be presented as Goddess Sharada wearing 18 “Atte” of Mangaluru Jasmine. This year the ‘Hore Kanike Procession was held on 25 September starting from Nehru Maidan and ending at the Temple.

The religious ceremony of the installation of the idol will be led by Kashi Madathipathi Sri Samyamindra Tirtha Swamiji. Sahasra Chandika Havana will be held from 27 September to 2 October at a cost of Rs 50 lakhs. After completion of the Havana, mass feeding will be held for nearly 30,000 devotees. A special ‘Deepalankara’ will be held on 5 October.