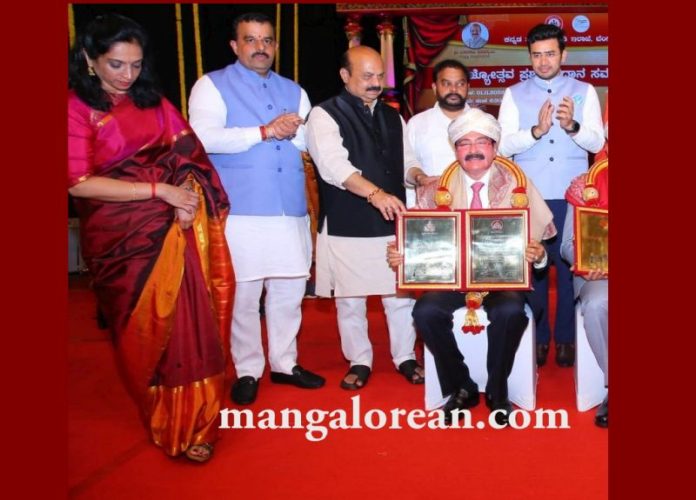 Mangaluru: In a glittering ceremony, Chief Minister Basavaraj Bommai conferred the most prestigious award on Jayaram Banan popularly known as THE KING OF DOSA, at the 67th Kannada Rajyotsava Celebrations held at Ravindra Kala Kshethra, Bengaluru here on November 1. 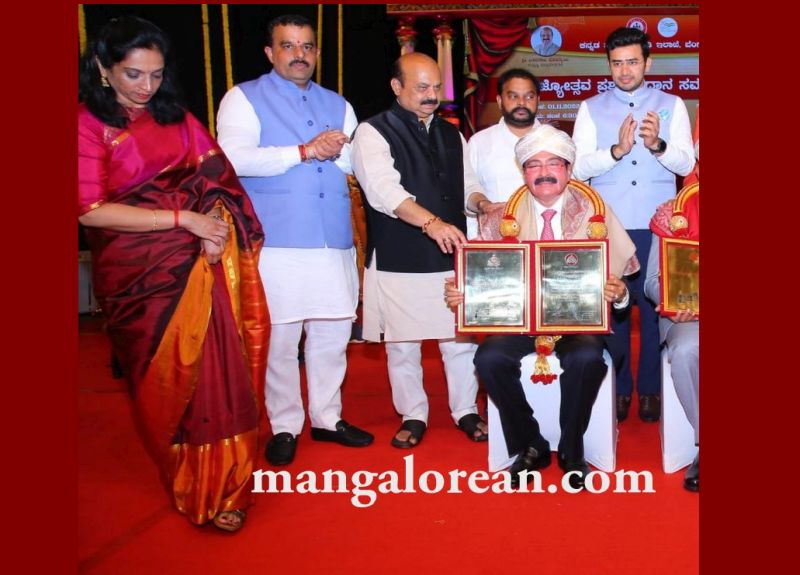 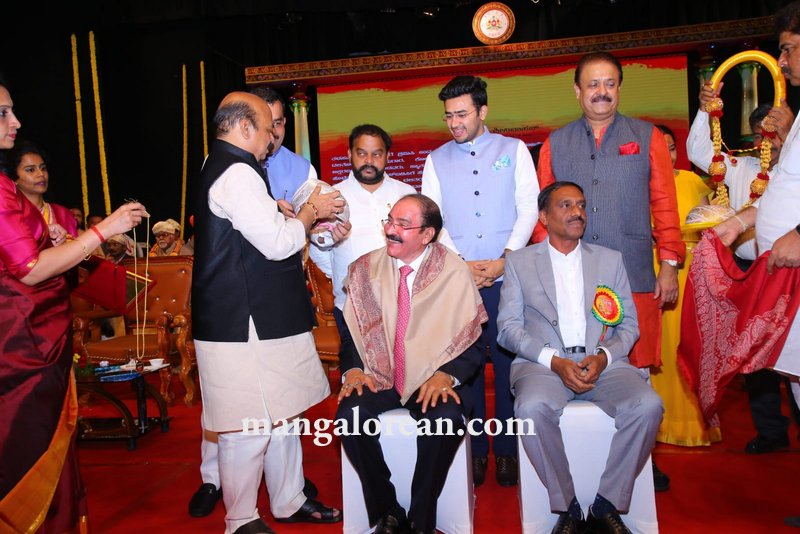 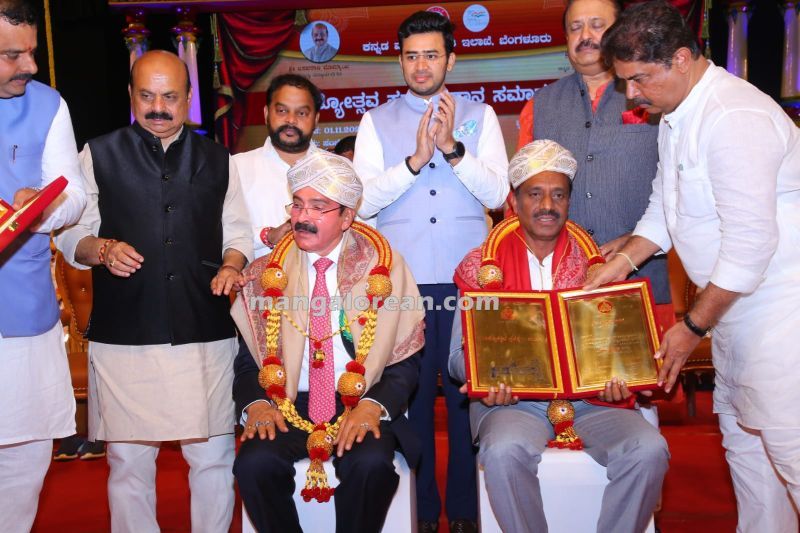 Jayaram Banan, the chairman of Jayaram Banan Group, owns a chain of Restaurants, Budget Hotels, Star-category Hotels and several canteens at industrial establishments. Jayaram started his career at the very young age of 13 in Bombay (now Mumbai), he dared to dream big and had the vision to achieve success in whatever they touched. 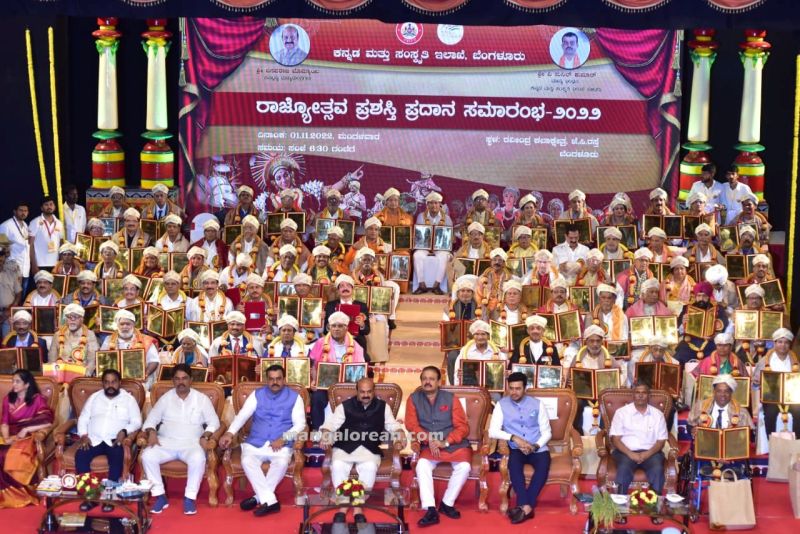 In the beginning, he started literally at the ground level and struggled very hard to make both ends somehow meet in this teeming and big city of Mumbai but always kept his spirits up. He never gave up hope of striking it big someday not far away in the future. After years of struggle in Mumbai, Jayaram Banan moved to Bangalore venturing to be on his own. But success evaded him here, he did not give up and shifted to Ghaziabad where he succeeded in getting a canteen contract. 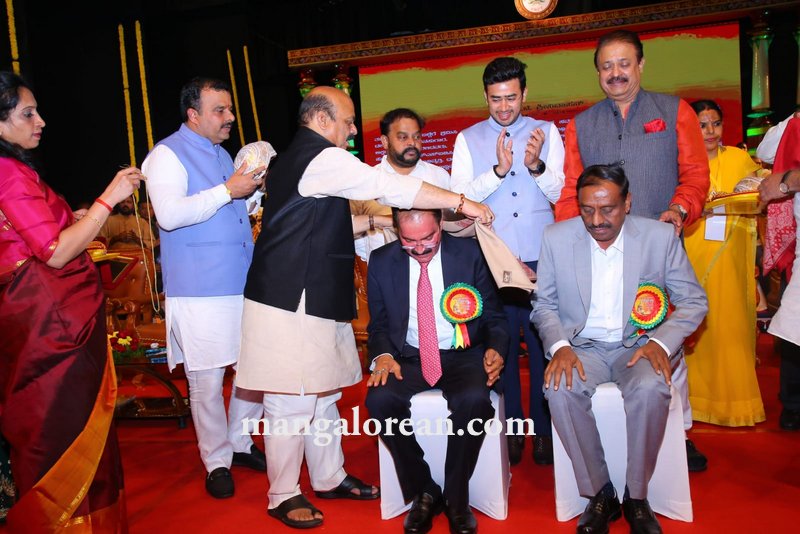 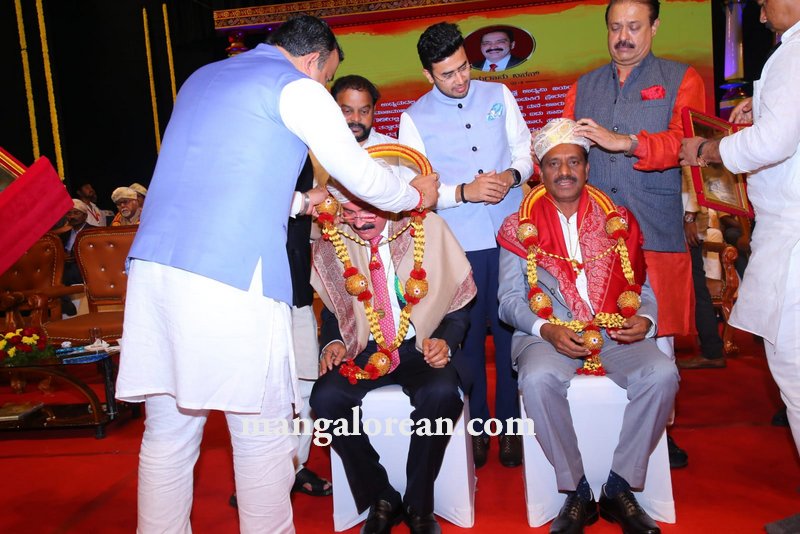 However, Destiny had other plans in store for him. With a small capital investment, he opened the first “Sagar” Restaurant in the year 1986 in the Defence Colony, New Delhi. It was still difficult days for him and the business took a while to stabilize. But dogged determination; resilience and persistence enabled him to sustain till such time the name Sagar started spreading as the Place to go for its affordably-priced and out-of-this-world Onion Rava Masala and NeerDosa, among others. With sheer hard work, dedication, Personal attention and motivation he made “SAGAR” a very popular name all over Delhi as the most affordable Restaurant for south Indian Snacks not only for the masses but also for the classes. Sagar Ratna expanded horizontally with its branches and franchisee outlets across the length and breadth of the country and more particularly in the northern parts with a Pan-India presence. 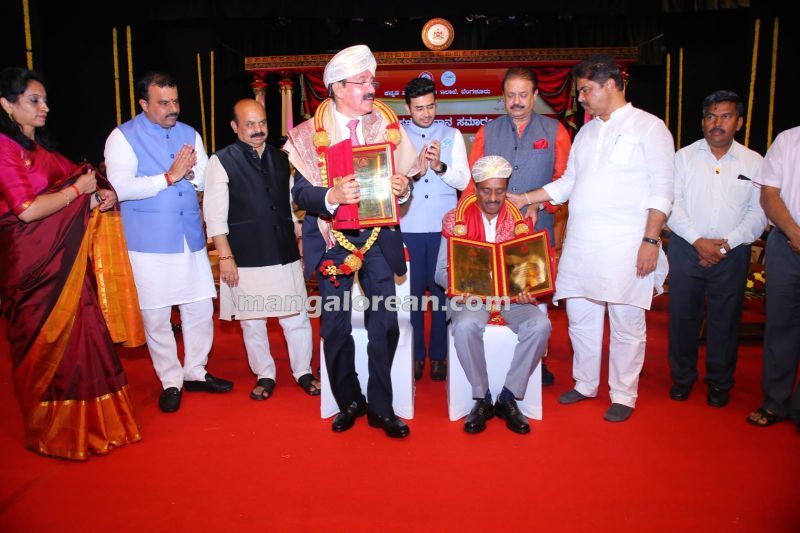 The hard work, and commitment to ensure excellent quality at all costs always backed by quick and efficient service enabled the growth of ‘Sagar Ratna’ as the Best Brand of a chain of vegetarian Restaurants in North India with a speciality in south Indian delicacies. It established an identity of its own for high-quality delicious food; quick, homely and personalized service; utmost hygienic atmosphere; Excellent upkeep of its premises & Low and affordable pricing. Success followed his hard work and soon it became the kind of business model most entrepreneurs dream of. Buoyed up by the phenomenal success achieved under the banner of Sagar Ratna, Shri Jayaram Banan embarked upon a value addition exercise to the chain by starting a Multi-Cuisine Restaurant in the year 2001 under the Brand name of “SWAGATH” offering coastal Food, Chettinad Food and speciality Mughlai & Chinese cuisine. Within a short span, Swagath also become a very popular brand in Delhi and won awards in the years 2004, 2006, 2007, 2008 & 2009 as the “Best Coastal Restaurant” instituted by M/s. Times of India. In the ITC-WELCOM GROUP – HT City Eating Out Guide 2004, it was awarded the “Best South Indian Restaurant (Non-Vegetarian)” for the year 2004 in the Stand Alone Category. 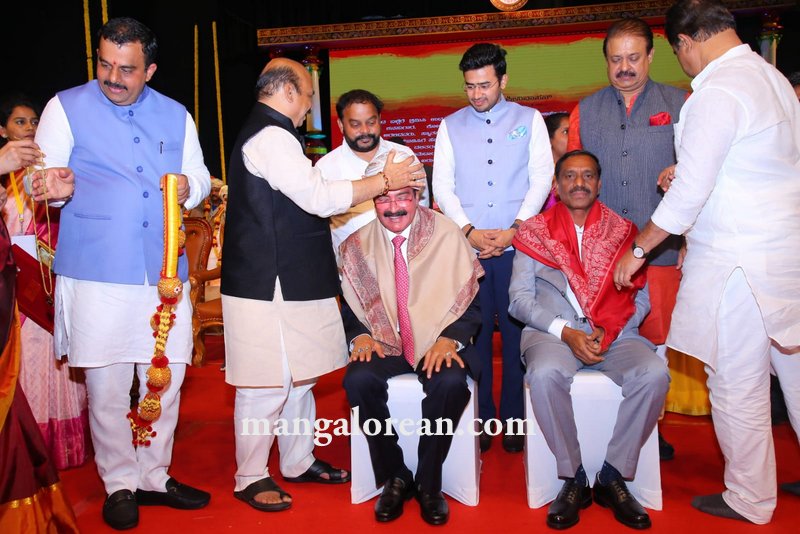 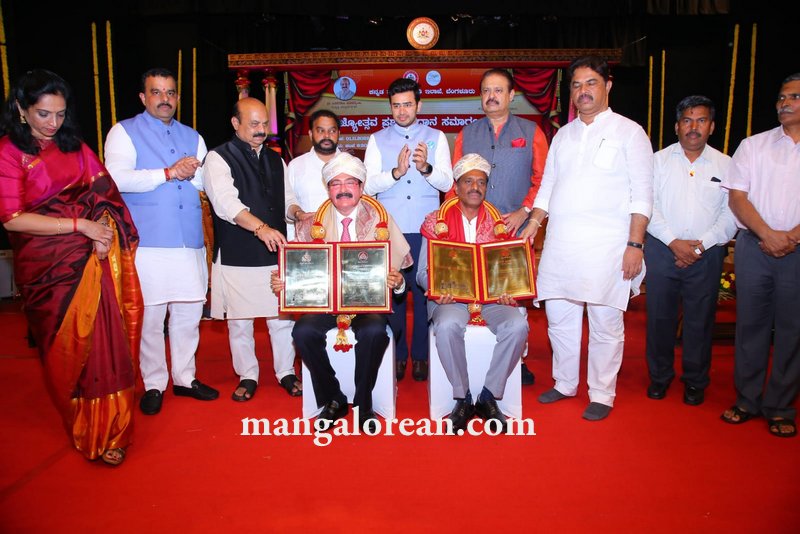 True to the adage that “Nothing succeeds like success” Awards poured in both on Sagar Ratna as the “Best South Indian Restaurant” consecutively for many years Times Food Award initiated by Times of India and Swagath. However, the phenomenal success made Jayaram Banan more humble and grounded and continues to be modesty and humility personified. He reiterates that he is a simple man with very simple needs.

The “Inc.India” Magazine hailed Jayaram Banan as THE SULTAN OF SAMBHAR.

In the year 2010, Shri Jayaram Banan set up Ocean Pearl Hotels Pvt Ltd an 84-Rooms luxurious Hotel in Mangalore, at Navabharath Circle, a very prominent place in Mangalore which has been voted as the Best Hotel in the city. Ocean Pearl Hotel is presently operating 5 Hotels in Karnataka State -2 in Mangaluru; One in Udupi; One in Hubballi and recently it has opened a Franchisee in Ujire town- very near to the Temple Town of Dharmastala. 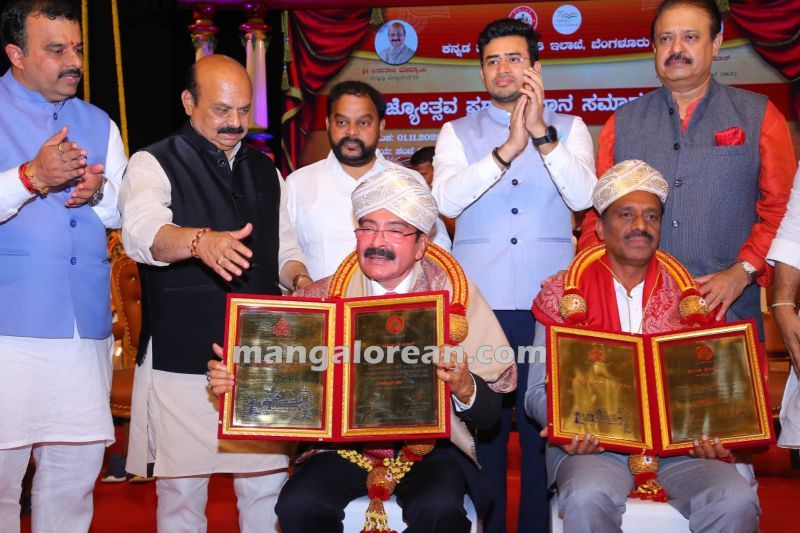 Shri Jayaram Banan forayed into Motel Business in Delhi (Chattarpur Mandir Road, Mehrauli) operating Motels and Banquet Halls spread over seven and a half acres of lush green Land located in the heart of New Delhi to cater to the niche segment of the national capital.

Jayaram Banan is instrumental in providing employment opportunities for more than 3500 persons under the banner of his JRB Group. Its contribution to CSR is in its recruitment process of 90% of its workforce byways that give job opportunities to the most poverty-stricken and needy young people who have to bear the responsibility of looking after their families. 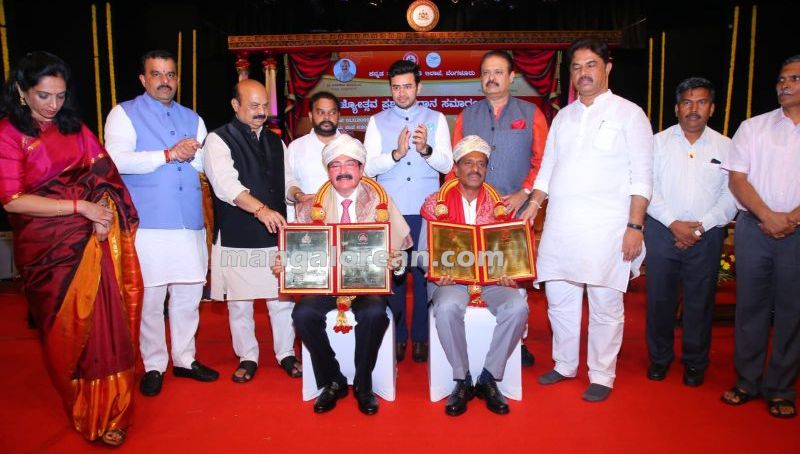 JRB Group a doyen in the Hospitality industry recruits for its ever-increasing workforce young people from remote villages of the Country; extensively trains them depending on their aptitude/skills etc. to operate/work in various fields and thereafter deploys them at its various outlets and also its Franchisee outlets thus enabling the needy young persons to get jobs at wages as approved by the State/Central Government. Besides providing reasonable employment and livelihood, the persons are benefitted in many ways such as the Employer’s contribution to Provident Fund, ESI etc.

Jayaram Banan has grown from humble beginnings into the owner of a highly successful and progressive conglomerate recognized as one of the leading players in the Hospitality industry.

Today the immensely popular “Sagar Ratna” is recognized as one of the largest chains of vegetarian restaurants in the Country. His other brands namely “Swagath”; “Ocean Pearl” and “Ocean Retreat”- each a Gem in its own right are the sparkling jewels in his crown, proudly depicting the untiring efforts of its promoter and owner Jayaram Banan.

Jayaram Banan is a firm believer in God and in his abilities to reach higher Goals in the area of Businesses he has chosen. The secret of his success is that “There is no substitute for hard work and to achieve success one must have self-belief/confidence”. 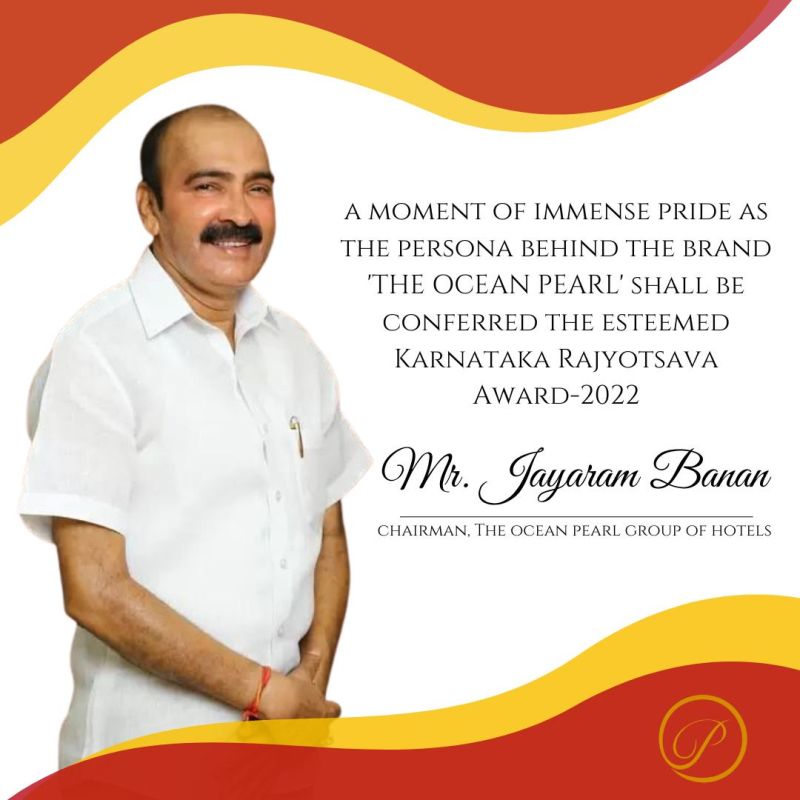 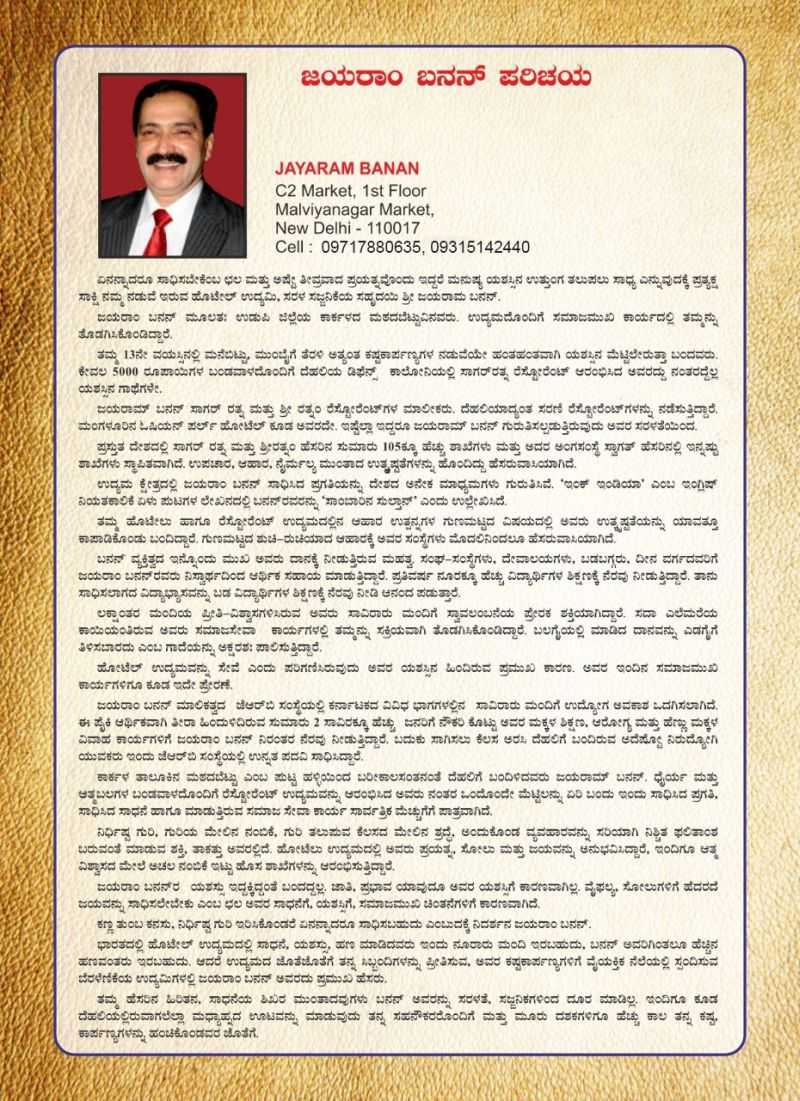