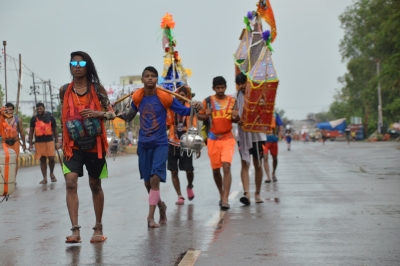 States must make ‘Gangajal’ available for devotees at nearest temple: Centre to SC

New Delhi: The Ministry of Home Affairs has told the Supreme Court that for the Kanwar Yatra the state governments must not permit movement of “Kanwariyas for bringing ‘Gangajal’ from Haridwar to the Shiv temples of their choice”.

The affidavit was filed by the MHA, after the top court on July 14, took suo moto cognizance of the Uttar Pradesh government’s decision to allow Kanwar Yatra amid the ongoing Covid pandemic.

“So far as the subject matter of the present proceedings, i.e., the Kanwar Yatra is concerned, the state governments must not permit movement of ‘Kanwariyas’ for bringing ‘Gangajal’ from Haridwar to the Shiv temples of their choice”, said the affidavit.

The affidavit added, “However, considering the age-old customs and religious sentiments attached, the State Governments must develop a system to make holy Gangajal available through tankers which should be available at an identified/designated locations so that nearby devotees can collect such, Gangajal and do ‘Abhishek’ upon their nearest Shiv temples.”

The MHA submitted that states must also ensure that this exercise of distribution of Gangajal amongst devotees and the rituals to be performed by such devotees in the nearby Shiv temples take place mandatorily ensuring social distancing, wearing of masks and adherence to all steps required for Covid appropriate behaviour and health protocols.

A bench headed by justice R.F. Nariman and comprising justice B.R. Gavai issued notice to the Centre, the Uttarakhand government and the Yogi Adityanath government and fixed the matter for hearing on Friday.

Taking cognizance of a news report stating that the Uttar Pradesh government is pressing ahead with the annual ritual that sees a heavy movement of pilgrims across states in the northern belt, the bench said: “We were a little disturbed given today’s headline…”