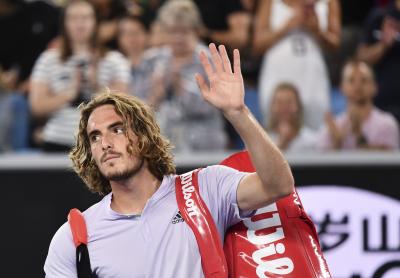 Stockholm Open: Tsitsipas surges into final with win over Ruusuvuori

Stockholm (Sweden): The world No.5 Stefanos Tsitsipas delivered a clinical semifinal showing, easing past Emil Ruusuvuori 6-2, 6-2 to reach the final at the Stockholm Open, here on Saturday.

The top seed broke Ruusuvuori’s serve five times in the pair’s maiden tour-level meeting, finding consistency behind his groundstrokes to overpower the Finn in 74 minutes.

The win improved Tsitsipas’ record in Stockholm to 7-0 and maintained his unbeaten record at the ATP 250 event. The Greek will hope to seal a second title at the hard-court event when he returns on Sunday for the championship match against Holger Rune.

“It was a great match from my side, I think I played very well,” said Tsitsipas after his victory.

“I was really focused, [it was] one of the matches where I was really into the game and I was able to produce some really good tennis throughout the entire match, pretty much. I was there, I was very daring, I was really going for it, and it worked in my favour,” he added.

Tsitsipas has shown no nerves upon returning to compete in Stockholm for the first time since 2018 when he lifted his maiden ATP Tour title in the Swedish capital. He has not dropped a set in moving past Maxime Cressy, home favourite Mikael Ymer and Ruusuvuori, and he believes that his past success at the event has helped him find his best level this week.

“I’ve created some good memories here. 2018 was the year that I got my first title here. Of course, I love good things in the back of my head. I’ve had some good interactions with the crowd, the people here are lovely, and I’m enjoying the Swedish hospitality,” said Tsitsipas.

Saturday’s victory was a Tour-leading 56th of the 2022 season for Tsitsipas, who has already booked his place at November’s ATP Finals. He has now reached seven tour-level finals this year, the joint-most alongside World No.1 Carlos Alcaraz.

Sunday’s clash against Rune will be an opportunity for Tsitsipas to avenge his four-set fourth-round defeat to the Dane in May at Roland Garros. The World No.5 admitted he sees some similarities between himself and Rune, who will be competing in his third tour-level final of the year.

“We are both big fighters. I’m going to try to give my best out there on the court. Holger is someone that has been developing and doing well recently. We have played plenty of times against each other, more on the practice court, and I’m looking forward to that battle,” said Tsitsipas.