Home Agency News ‘Student’ held for looting onions in UP 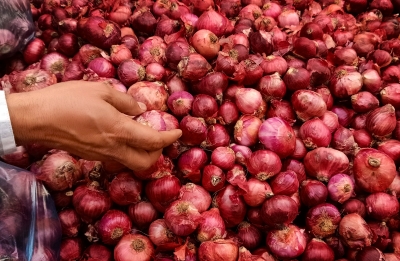 ‘Student’ held for looting onions in UP

Prayagraj (Uttar Pradesh):  In a bizarre incident, a youth has been arrested for allegedly looting around 60 sacks full of onions from two persons who were carrying the consignment from Jasra mandi to Pratapgarh on October 30.

The accused was staying in Holland Hall hostel of Allahabad University illegally and also claimed to be a student after being caught by the police.

Senior Superintendent of Police (Prayagraj) Shailesh Kumar Pandey said, “On October 30, the victim Sandeep Kumar, approached Colonelganj police and narrated that he along with his co-worker Priyanshu Kushwaha were on their way to Pratapgarh from Jasra vegetable market on a pick-up van to deliver around 60 sacks full of onion consignment (around 34 quintals). When they reached near varsity road, three unidentified car borne miscreants intercepted them and asked to pay Rs one lakh.”

When the victim and his co-worker expressed their unwillingness to pay the said amount, the miscreants forcibly took both of them into their car, and brought them to Holland Hall hostel and held them captive for hours.

The miscreants also took the onion loaded pick up van to the nearest vegetable market and unloaded it.

The miscreants then returned to the hostel and handed over the pickup van keys to them.

The victims told police that miscreants had also looted Rs 11,500 cash from them. Once they handed over cash, the miscreants released them from the hostel, said the SSP.