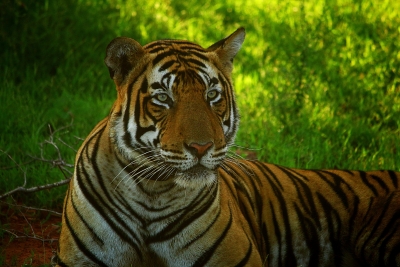 Sunderbans might have additional notified core areas for tigers soon

The mangrove forests of Sunderbans in West Bengal, scattered over the coastal belts of South 24 Parganas and North 24 Parganas districts, might have additional notified core areas for tigers in the coming days.

Kolkata: The mangrove forests of Sunderbans in West Bengal, scattered over the coastal belts of South 24 Parganas and North 24 Parganas districts, might have additional notified core areas for tigers in the coming days.

The state forest department is considering a decision on this count which can be implemented soon.

Sources in the forest department said that notifying additional core areas has become necessary in the backdrop of the recent findings that indicate a major increase in the number of Royal Bengal Tigers inhabiting these mangrove forests that come under West Bengal.

Tiger Census in India is conducted at an interval of four years.

“We are expecting the final report from the Wildlife Institute of India soon. I am sure that the figures will be hovering in the same range as predicted by our department,” he said.

Forest department officials said that even before analysing the footage of the trap-cameras, an increase was noticed in the number of Royal Bengal Tigers.

“Of late, tigers have been spotted at certain locations where they were not seen before. There lies the necessity of increasing the notified core areas to prevent man-animal conflict,” a forest department official said.

However, he admitted that increasing the number of notified core areas is a bit of a lengthy process.

First, the forest department will have to conduct a survey to identify the pockets that would be included in the extended notified core area zone. After that the state government will have to send a detailed project report to the Union government for clearance from the Union Ministry of Environment, Forest and Climate Change. The work for extension of notified core areas can start only after obtaining clearance from the Union ministry.