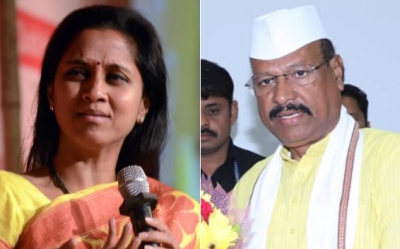 In her first reaction to the “abuse” – which forced even the ruling Balasahebanchi Shiv Sena (BSS) to apologise – Sule on Tuesday said that such language was not expected from someone who is in power and it is against Maharashtra’s culture and traditions of respect to women.

She also expressed her clear displeasure at the episode which sparked protests by NCP activists across the state besides loud protests from leaders of Congress, Shiv Sena-UBT, and the Maharashtra Navnirman Sena.

Although the ruling BSS and ally Bharatiya Janata Party leaders seemed to have ignored the fracas, some leaders said that after Sattar’s unconditional apology, the matter should be treated as closed.

Simultaneously, Sule said that while the Minister’s language was abominable now that it has been condemned from all over, there’s no need to give him much importance, indicating she wanted to move on.

“I thank you all for your support… I request you to stop commenting on the matter now as the entire state has taken note,” she urged.

Under severe fire on Monday, Sattar quickly beat a retreat denying having used the derogatory words against Sule but later said “sorry”, even as senior BSS Minister Deepak Kesarkar resorted to damage control by apologising on behalf of the government.

In a massive backlash, NCP activists protested in Mumbai, Thane, Pune, Nashik, Aurangabad, and other regions slamming Sattar, pelting stones at his official residence and private home in Mumbai and Aurangabad respectively, and demanded his ouster from the cabinet and resignation of Chief Minister Eknath Shinde.