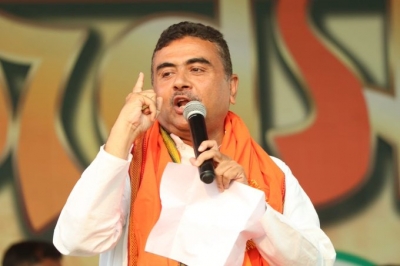 Kolkata:  BJP MLA from Nandigram and the Leader of the Opposition (LoP) in the West Bengal Assembly, Suvendu Adhikari, along with other BJP MLAs walked out of the House on Tuesday following a heated exchange of words with the MLAs of the treasury bench.

The arguments erupted after Adhikari, who had defeated Chief Minister Mamata Banerjee by a slim margin in the recently-concluded Assembly polls, raised the issue of Banerjee’s defeat in the elections in his speech.

But Speaker Biman Banerjee interrupted him and said that the matter is sub-judice and cannot be mentioned in the Assembly. When Adhikari protested, the MLAs of the treasury bench started shouting following which the BJP MLAs left the House in protest.

Later at a press conference, Adhikari said, “I told that three important things happened in these elections. Firstly, for the first time BJP has become the main opposition party with 77 MLAs. Secondly, there is no Congress or Left Front MLA now, and thirdly, Mamata Banerjee lost the election yet she is the Chief Minister of the state.”

“When I was speaking, one ruling party MLA used unparliamentary words against my father. I asked the Speaker to expunge the words and take action against the concerned MLA and he said he would see to it. This Speaker has become a party-man who is throttling the voice of democracy. His weakness towards the party (Trinamool Congress) has been exposed and so I felt that it is useless to stay in the House,” Adhikari added.

Adhikari, who was in the House for the first time as a BJP MLA, said that the saffron party wanted to follow democratic norms and protocols.

“We moved an adjournment motion against the post-poll violence but that was rejected. Yet we stayed inside the House. The ruling party MLAs were taunting us yet we decided to respect democracy and stay but if we cannot say anything, what is the use of staying inside the House,” Adhikari asked.

“In the post-poll violence in Bengal, 45 BJP supporters have been killed, numerous women have been raped while thousands of people were forced to leave their houses. We have come here to speak about the people and if we can’t do that, we will not stay. Everyone has now seen the language-terrorism and muscle power of Trinamool Congress,” Adhikari said.