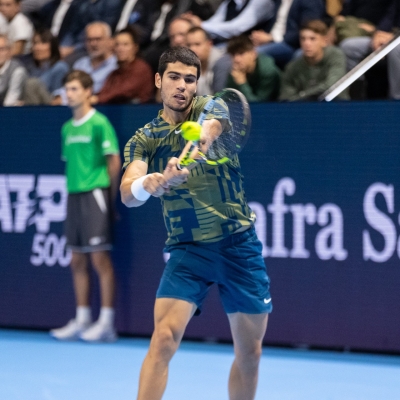 Swiss Indoors: Alcaraz soars into semifinals with win over Busta

Basel (Switzerland): World No.1 Carlos Alcaraz moved to within two wins of capturing his sixth tour-level title of the season on Friday when he overcame Pablo Carreno Busta 6-3, 6-4 to reach the semi-finals of the Swiss Indoors, here.

The 19-year-old Spaniard looked in control throughout the one-hour, 38-minute clash at the ATP 500 event, opening his shoulders to hit through his countryman on the indoor courts.

Alcaraz overpowered Carreno Busta during the backhand exchanges and showed good touch around the net to efficiently win points and triumph.

“On court, there are no friends. You have to be focused and go for the match and that is what I did,” he added.

The World No.1 now leads Carreno Busta 2-0 in their ATP head-to-head series, having defeated him in the Barcelona final in April. Alcaraz, who defeated Jack Draper and Botic van de Zandschulp earlier this week, will next play Felix Auger-Aliassime in the semi-finals on Saturday.

“It is going to be a really tough match. He is playing really well. He has had great victories this year. I will have to be really focused. I will try to show my best tennis against him,” Alcaraz said, looking ahead to his match against Auger-Aliassime.

The Spaniard is now 4-2 since his US Open triumph last month — which earned him his debut atop the ATP Rankings — and 55-11 on the season overall. Through to his ninth semifinal of the year, Alcaraz is looking to add to his Tour-leading five titles in 2022, which includes ATP Masters 1000 crowns in Miami and Madrid.

If he can overcome Auger-Aliassime and reach his eighth final of the season, he will move ahead of Stefanos Tsitsipas, who has advanced to seven championship matches this year. The Greek could also reach the final in Vienna this week, though.