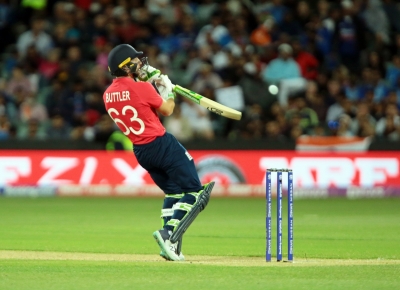 On the eve of the second semifinal of Men’s T20 World Cup, England skipper Jos Buttler had said that he would do everything in his power to not let an India-Pakistan final happen in Melbourne.

Adelaide: On the eve of the second semifinal of Men’s T20 World Cup, England skipper Jos Buttler had said that he would do everything in his power to not let an India-Pakistan final happen in Melbourne.

Almost 24 hours later, Buttler stayed very true to his word by combining with Alex Hales to thrash a listless India by ten wickets in the second semifinal of Men’s T20 World Cup at the Adelaide Oval on Thursday.

They did things right from the word go, now allowing India to have a good start with the bat, denying them scoring opportunities towards the short square boundaries and forced their batters to play more towards the longer side of the ground, with Chris Jordan, Adil Rashid and Chris Woakes being the best bowlers for England.

Though Virat Kohli (40-ball 50) and Hardik Pandya (33-ball 63) got contrasting fifties to take India to 168/6, Hales hit 86 not out off 47 balls while Buttler smacked an unbeaten 80 off 49 balls to chase down the total in style with four overs remaining.

India were off their lengths and did not offer any challenge to the opening pair of Hales and Buttler, who put them under pressure from the word go. Moreover, they were more than sloppy in the field, thus being comprehensively outplayed and hammered by England in all departments of the game.

With a dominating win by dismantling India, England will now face Pakistan in the final of the tournament at the Melbourne Cricket Ground on Sunday, 30 years after the two teams met in the 1992 ODI World Cup final at the very same venue.

England are now a win away from being the first team to hold two Men’s World Cup trophies at the same time, while India’s knockout hoodoo in the global tournaments was extended as Hales and Buttler made them look utterly clueless at Adelaide.

Buttler would take a brace of fours off Arshdeep Singh and Axar Patel through the off-side while Hales hammered a six over cover off Bhuvneshwar as England matched India’s power-play total in just 3.2 overs.

Hales was the more aggressive of the two, thumping Mohammed Shami over mid-off for six and got an outer edge running past keeper for four. Axar came under more attack as Hales and Buttler hit him for a six and four respectively to sign off from power-play unscathed.

Post power-play, Hales stepped up the attack against Indian spinners – sweeping Ravichandran Ashwin for six and rocked back to hammer Axar over deep mid-wicket for another maximum to get his fifty by the end of eighth over.

Hales then brought up the century of the opening stand by pulling Hardik Pandya for a six over deep mid-wicket and followed it up with another six by slog-sweeping off Ashwin. Buttler ramped Pandya over fine leg for four and got his fifty with a pulled six over deep square leg.

Buttler then hit Shami for two fours and a six in the 14th over, where he also got a reprieve as mid-off failed to take the catch and parried the ball to boundary rope. Fittingly, Buttler finished off the innings in style by dispatching Shami over long-on for a majestic six to enter the final.

Earlier, Woakes found the outer edge of KL Rahul along with some extra bounce to give a simple catch behind to the keeper. Sam Curran had Kohli nearly caught at first slip apart from left-arm pacer beating him on the previous ball. But the right-hander got off the mark with a stylish lofted drive off Woakes for six.

Rohit Sharma brushed off his cagey start by uppishly flicking and pulling over mid-wicket to collect back-to-back fours. He went on to sweep Rashid over square leg for his third four of power-play, before Kohli used his wrists to loft over Liam Livingstone’s head for another boundary.

After lofting Jordan over extra cover for four in the ninth over, Rohit tried to pull but mistimed to diving wide long-on. Suryakumar Yadav got going by swivelling Stokes for six over fine leg and lofted over off-side for four more. But he failed to get the connection on a slower leg-break outside the off-stump off Rashid and was caught at deep point.

Kohli took fours off Woakes, Livingstone and Jordan while Pandya also hit a four off the spinner, signalling that India were looking to shift gears as the latter hit three sixes in the 17th and 18th overs.

After Kohli got his fifty in 40 balls, Jordan had the last laugh, having him slicing a wide yorker to short third man. After Rishabh Pant cut Curran over backward point for four in the 19th over, Pandya expertly steered him through the same region for another four.

Pandya pulled a short ball over deep mid-wicket for six, and got his fifty in 29 balls as Stokes misfielded at deep mid-wicket to concede a four. He thumped Jordan for six and four before stepping on his stumps to be out hit-wicket on the final ball.