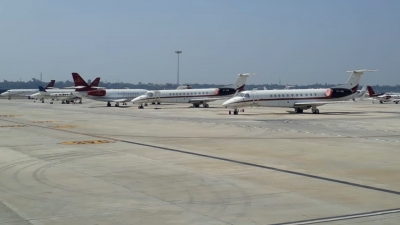 Kochi: A special private jet sent by the Telangana government will on Friday carry estranged Kerala businessman Sabu Jacob and his team for discussions on setting up his proposed Rs 3,500 crore unit in the state.

Interacting with the media on Thursday, Jacob, who heads Kitex – one of Kerala’s biggest industrial groups, said they will leave on Friday on the private jet sent by the Telangana government to have discussions with them.

“By now, I have already completed a few rounds of discussions on this with the Telangana Industries Minister (K.T.Rama Rao) and his top officials over telephone. We are going to have more discussions and we will return back on Saturday,” he said.

Kitex Garments, the second-largest children’s apparel manufacturer in the world, has announced the scrapping of the Rs 3,500 crore project for which it had signed a memorandum with the Kerala government at the ‘Ascend Global Investors Meet’ in Kochi in January 2020.

As part of the project, an apparel park was to be opened in Kochi, besides the establishment of industrial parks in Thiruvananthapuram, Kochi, and Palakkad.

Voicing his ire against his home state’s government, Jacob said: “I was hunted as an ‘animal’ here by various officials. 76 cases was registered against us by various agencies.”

Early this week, Kerala Industries Minister P. Rajeev held discussions with various departmental heads and after that, he sought to clarify that the state government did not suo motto take up any probe against Kitex and they only looked into certain complaints that came before the various government departments.

Kitex fell on the wrong side of the political establishment in Kerala after Jacob floated a political outfit named ‘Twenty 20’ — which was earlier registered as a non-profit organisation — and wrested power in the Kizhakkambalam panchayat in Ernakulam district.

In the recent Assembly elections, Twenty 20 contested six seats but could not win any.

Jacob has gone on record to state that the Kerala government is not providing any subsidy, including for power, noting that it is all profit for the state government and there is no professional interest being envisaged by it.

He had also alleged that things are at the mercy of the local level leaders here, and even an upper division clerk in the state can scuttle the prospects of an industrialist.

Kerala is lagging behind in industrial growth and the attitude of the rulers and the bureaucracy is the reason behind this, he had said.

Jacob and his establishment saw 11 teams of officers from various departments raiding the company in the past one month. The company employees were also grilled for hours.

It was then that Jacob had announced that he will move out of the state, following which offers poured in from nine states.