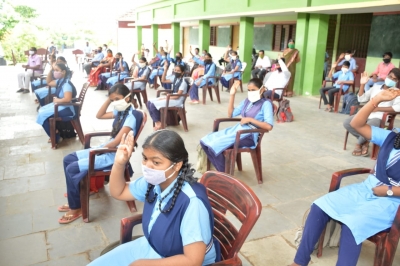 Hyderabad: The Telangana government on Monday decided to re-open educational institutions for Class 9 and above from February 1.

Chief Minister K. Chandrasekhar Rao directed the officials to make arrangements for re-opening classes in all the private and government educational institutions.

Classes should be held for the students of Class 10, Intermediate (11 and 12), Degree and other professional courses, he told officials at a review meeting.

KCR, as the Chief Minister is popularly known, also wanted ministers to visit hostels for students from Scheduled Castes, Scheduled Tribes and Backward Classes and see to it that they are fit for the students to stay.

The details like the timings and precautionary measures to be taken will be announced later.

The decision came amid the declining caseload of Covid-19 in the state. Health officials informed the Chief Minister that pandemic situation has come under control with daily count of only 300-400 new cases.

The proposed vaccine rollout from January 16 also influenced the decision in favour of re-opening the educational institutions.

It came as a relief for a section of parents who were worried over their children’s education. The educational institutions were closed since mid-March. The pandemic situation also forced cancellation of annual examinations for all classes. The government promoted students to the next class.

Meanwhile, the decision has been welcomed by many parents and teachers. “This is the right decision in the interest of students,” Mohammed Rafi Ahmed, a lecturer in a private engineering college in Hyderabad, told IANS.

Rafi, whose son is a student of Class 10 in a private school, feels that his education has already suffered a lot due to pandemic. “This is a crucial year for him because his interest and choice of subjects will help him decide the stream for intermediate and further studies. The students have already lost lot of time but I believe offline classes in remaining couple of months will be some help,” he said.

Teaching community has also welcomed the decision and they hope that the move will help both students and teachers and contribute to restoration of normalcy in educational institutions. “There is no alternative to offline classes. The reopening of schools will not only help students of Class 9 and 10 but will also take off pressure on them due to virtual classes,” said Hajera Begum, a teacher at a leading private school.

Last week, a survey had revealed that 69 per cent of parents want schools to reopen from April or after. Only 23 per cent said schools should reopen in January.

Survey by Local Circle, an online platform, found that more number of parents are worried about their children’s education rather than fear of Covid-19.

Members of Telangana Parents Association had also called on state Education Minister Sabitha Indra Reddy last week to appeal to her to reopen schools and other educational institutions by mid-January. They briefed the minister on various issues faced by the parents due to online classes.