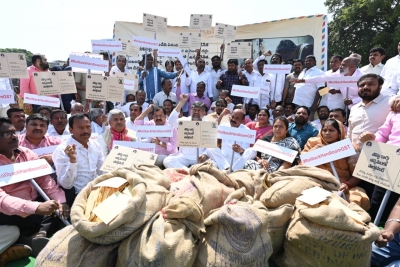 Hyderabad: In a novel protest, thousands of handloom weavers from Telangana on Monday sent postcards to Prime Minister Narendra Modi demanding rollback of Goods and Service Tax (GST) on handlooms.

Thousands of postcards were deposited at the General Post Office (GPO). Weavers and handloom supporters gathered at Nizam College Grounds and marched to GPO in a rally.

The participants were carrying pictures of Chief Minister K. Chandrasekhar Rao and state Handlooms and Textiles Minister K. T. Rama Rao as well as placards with the demand to roll back the GST.

The wavers demanded the Centre to immediately roll back five percent GST on handlooms products and its raw materials.

The weavers wrote the post cards responding to the call given by Rama Rao who launched the campaign on October 22 demanding GST rollback. The campaign received massive response from weavers spread across the state.

Addressing people gathered at the college grounds, Ramana demanded that the GST should be rolled back. He has also demanded the union government to restore the schemes for weavers which were scrapped, including ICICI Lombard Health Scheme and Mahatma Gandhi Bunkar Bima Yojana.