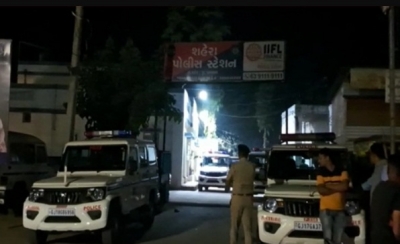 Tension gripped Gujarat’s Panchmahal district after Congress supporters attacked a man for lending his car to the BJP for campaigning in the Sahera constituency.

Godhra: Tension gripped Gujarat’s Panchmahal district after Congress supporters attacked a man for lending his car to the BJP for campaigning in the Sahera constituency.

The Panchmahal police had to open fire on the violent group to disperse them.

According to police, the incident took place on Wednesday evening, when a group supporting Congress candidates in the Sahera constituency, vandalised a vehicle and assaulted its owner.

In his complaint, Police Inspector R.K. Rajput stated that when he, along with his team, was patrolling the area, they saw a mob outside BJP leader Mahendrasinh Dabhi’s office near Aniyad square.

On inquiring, they learnt that the group was upset with the eco car owner Rangitbhai Pagi as he had leased his car to BJP for campaigning. The entire villagers are strong Congress supporters.

The group vandalised the car and dragged Rangitbhai out and attacked him even as one of them instigated others to kill him.

At this, the police intervened and resorted to open firing to disperse the mob.

Before the mob left the area, they pelted stones on the police team, in which the complainant too had received minor injuries.

Complaint have been filed against six persons on charges of attempt to murder, rioting, unlawful assembly, criminal intimidation and other sections of the Indian Penal code.