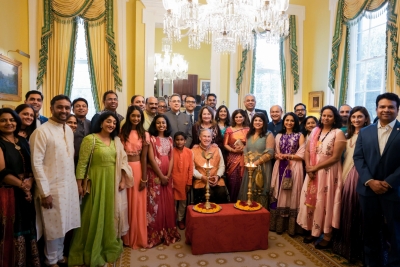 Austin: Texas Governor Greg Abbott celebrated Diwali with prominent members of the Indian-American community at his official residence in Austin, the state capital.

“Tonight, Cecilia & I celebrated Diwali at the Governor’s Mansion. We welcomed friends as we lit Diwali lamps & celebrated the victory of light over darkness, goodness over evil, & hope over despair. Happy Diwali to those celebrating the Festival of Lights!,” Abbott tweeted and shared pictures from the event.

The couple was dressed in ethnic Indian attire as they welcomed guests, and also lit the traditional lamp to mark the festival.

Diwali is annually celebrated at Abbott’s official residence in Texas, which is home to the second-largest Indian-American population in the US.

It was only in 2020 that the event was cancelled due to Covid.

Indian-Americans were true partners in the growth of the Texas economy and have enhanced the values of Texas, Abbott said according to local media reports.

“We are glad they have called Texas their home,” he said.

The event was attended by Consul General of India in Houston, Aseem Mahajan, Arun Agarwal, vice-chair of Texas Economic Development Corporation, and Dr Satish Nayak, who serves on Texas medical board as governors’ appointee.

Members from the Indian Association of North Texas and US India Friendship Council also marked their presence.