Home Fit & Fun Entertainment The Cholas are in Las Vegas: ‘Ponniyin Selvan’ promo lights up ‘The... 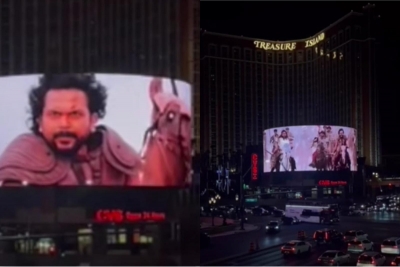 The Cholas are in Las Vegas: ‘Ponniyin Selvan’ promo lights up ‘The Strip’

Mumbai: Mani Ratnam’s epic movie, ‘Ponniyin Selvan-I’, has become, according to its makers, Lyca Productions, the first Tamil film to release its teaser on the fabled billboards of Las Vegas.

The king-size images of the Chola emperor, Aditya Karikalan (played by Chiyaan Vikram), and the commander Vallavaraiyan Vandiyadevan (essayed by Karthi), have lit up the iconic Las Vegas Boulevard with the entertainment strip’s landmark, The Bellagio, looming in the background.

Earlier on Saturday, pictures of the ‘PS-1’ cast and crew, including Mani Ratnam, Vikram, Karthi and Trisha, all travelling economy class to Mumbai for the film’s promotions, with the tagline ‘The Cholas are coming’, was trending on Twitter.