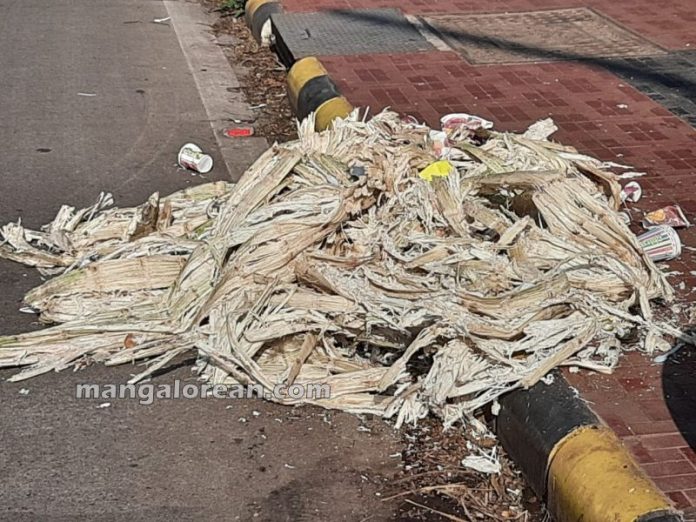 The New WIDE Footpaths by Mangaluru Smart City Ltd (MSCL) on Kadri Park Road Encroached by Street Vendors & Trashed- With most of the street vendors being Sugarcane Juice Vendors, the left behind Sugarcane waste is dirtying the area, filled with plenty of mosquitoes and flies, posing health hazards to the visitors. The area at the entrance of the Park is adorned with banners, thereby spoiling the beauty of the park

Mangaluru: Ever since the SMART officials of MANGALURU SMART CITY TLD (MSCL) constructed the new WIDER FOOTPATHS, they have been much used by street vendors, for illegal parking etc, rather than actually used by pedestrians. We are already seeing illegal parking of vehicles and encroachment along footpaths by shopkeepers and street vendors that have choked the City, thereby causing huge inconveniences to the public. Many citizens are questioning what is the use of spending lakhs/crores on these senseless Wide Footpaths when most of it is used for parking by four-wheelers and two-wheelers owners, street vendors, stray dogs, homeless/beggars etc. 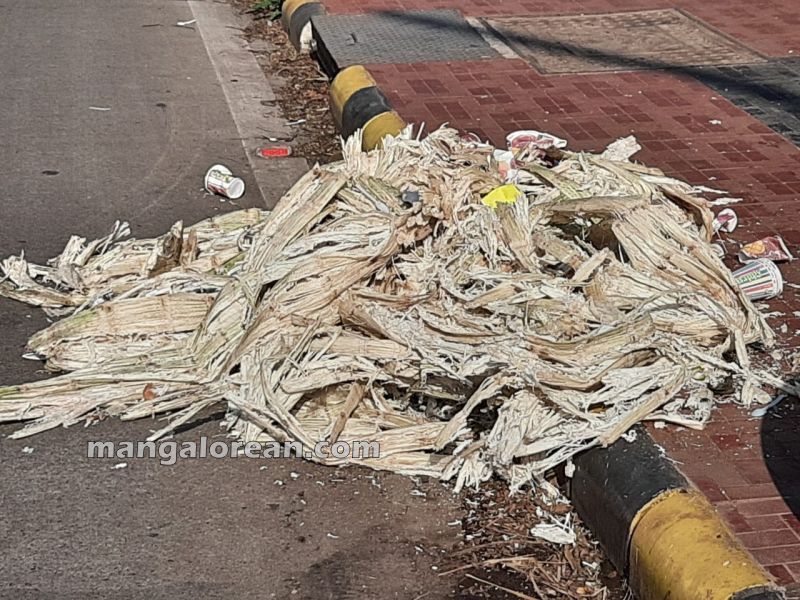 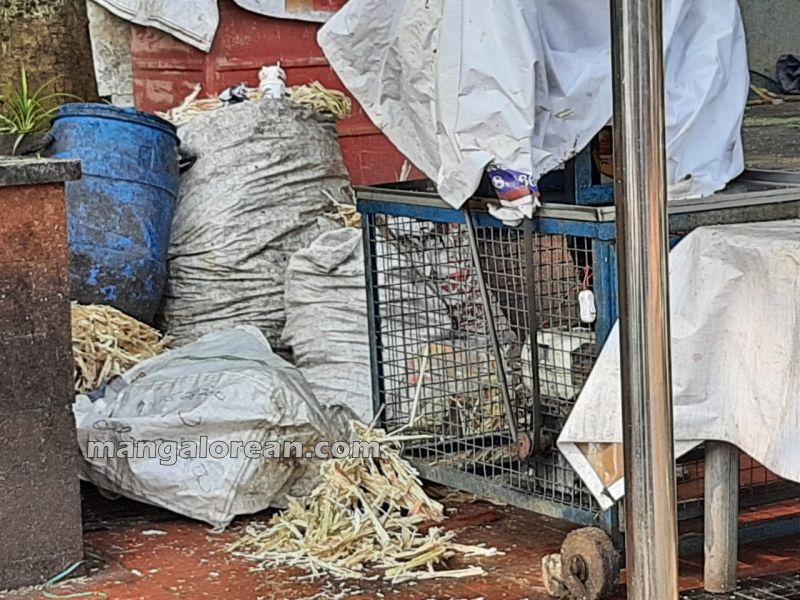 The illegal and haphazard parking of vehicles has made citizens/pedestrians’ lives miserable. The choking of roads and footpaths in some of the main streets is already facing a space crunch thereby causing immense problems for the public. People park their vehicles illegally without bothering about the space and the inconvenience caused by it. especially on these newly constructed wide footpaths The choking of space leads to frequent traffic jams in the main areas. The locals say that all this has been happening under the nose of Mangaluru City Corporation (MCC) and MSCL authorities, and political leaders from the ruling party. They all have failed to act against the encroachers who have occupied new footpaths and illegally park their vehicles also. 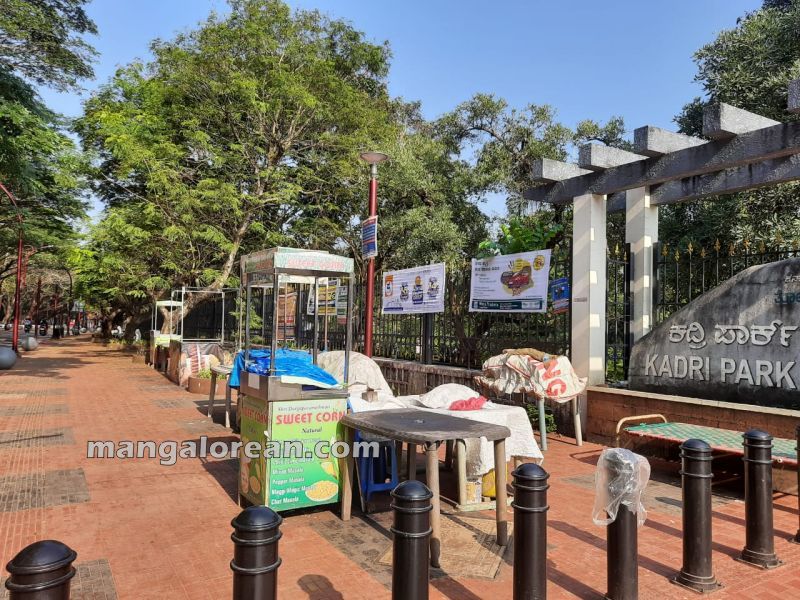 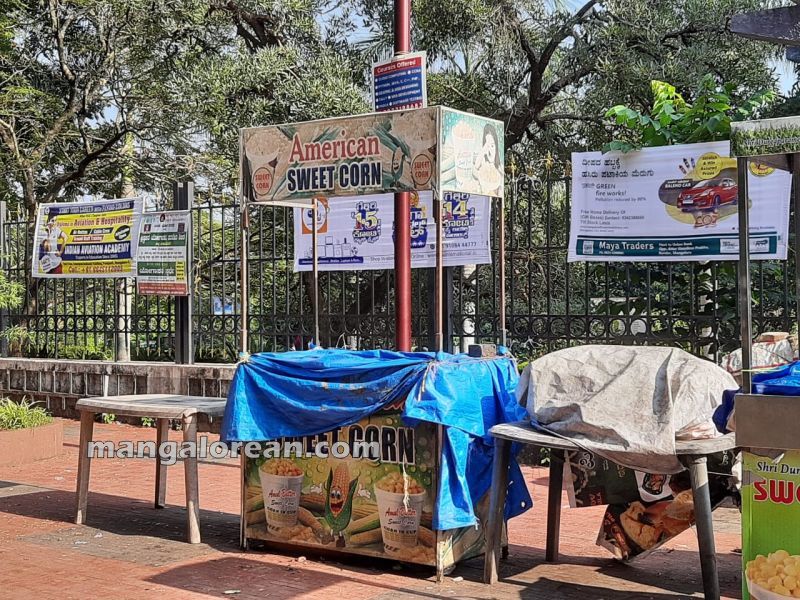 Just look at the new wide footpaths along the stretch of Kadri Park Road which is being developed by MSCL, now being used by street vendors who are making a brisk business and the footpaths are trashed with garbage, which the city officials have turned a blind eye against. No action has been taken either by MCC or MSCL- other than just BIG talks during meetings, that they will evict illegal street vendors immediately. With roadside vendors and shopkeepers occupying footpaths leaves no space for pedestrians, who are forced to walk on the streets. With the Sugarcane waste scattered or dumped along the footpath, the morning walkers are finding it hard to walk through such a mess. This morning a team of doctors who daily walk along this stretch of Kadri Park informed Team Mangalorean to highlight this issue so that the concerned authorities will know their drawbacks and negligence. 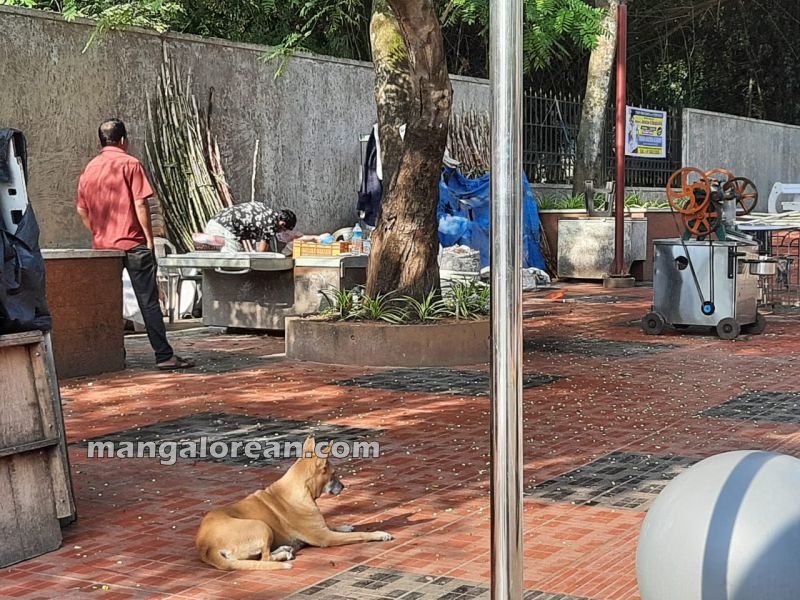 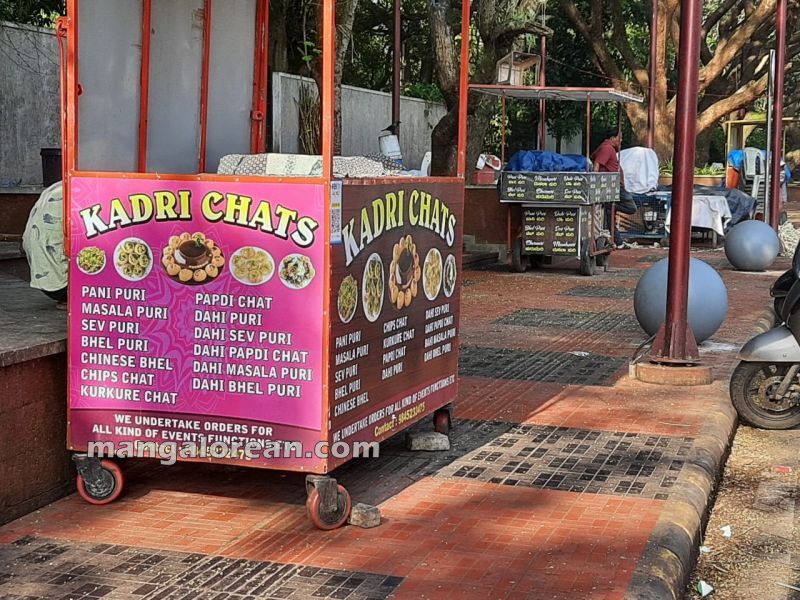 When Team Mangalorean contacted the concerned persons in MSCL and MCC they said that they would look into it and action will be taken against the street vendors occupying the footpaths and people parking their vehicles illegally.- but as of now, no action has been taken, other than just promises. If MSCL or MCC is constructing these footpaths, it is their responsibility to see that no illegal street vendors occupy the footpaths, and also see that no vehicles are parked. First of all Smart City Mangaluru needs WIDER Roads & Not WIDER Footpaths! Period. These wide footpaths have been already encroached by hawkers/squatters- Has the design tried to include them? Do they have designated hawker zones?- I want to ask the Smart Engineers behind the senseless Wide Footpaths.

NO PARKING SIGNS IS NOTHING BUT A JOKE? 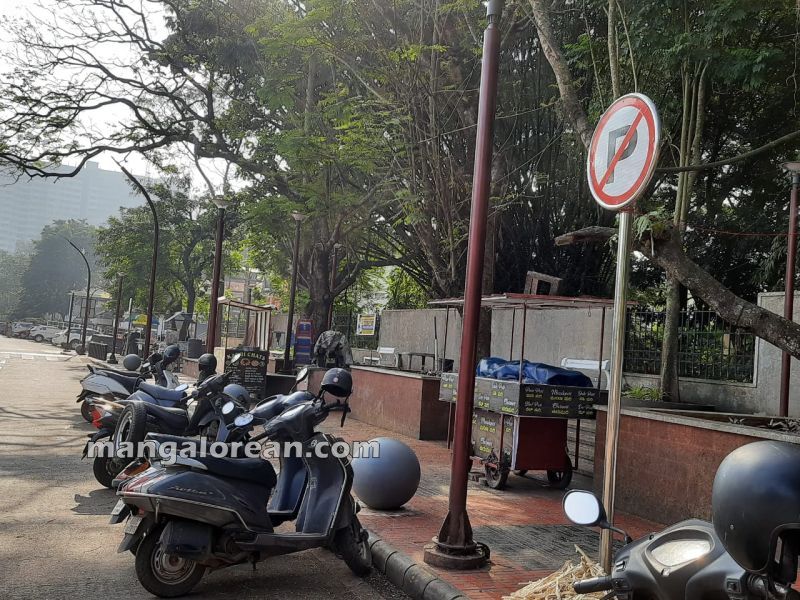 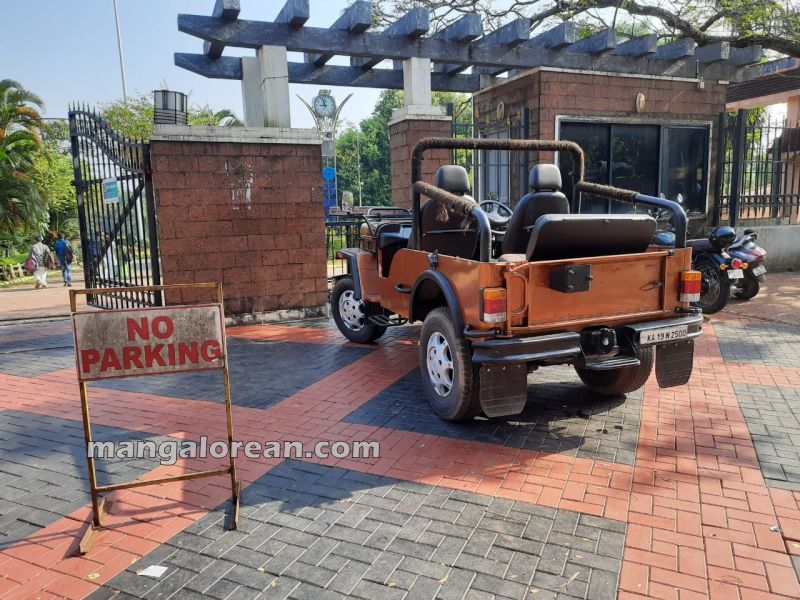 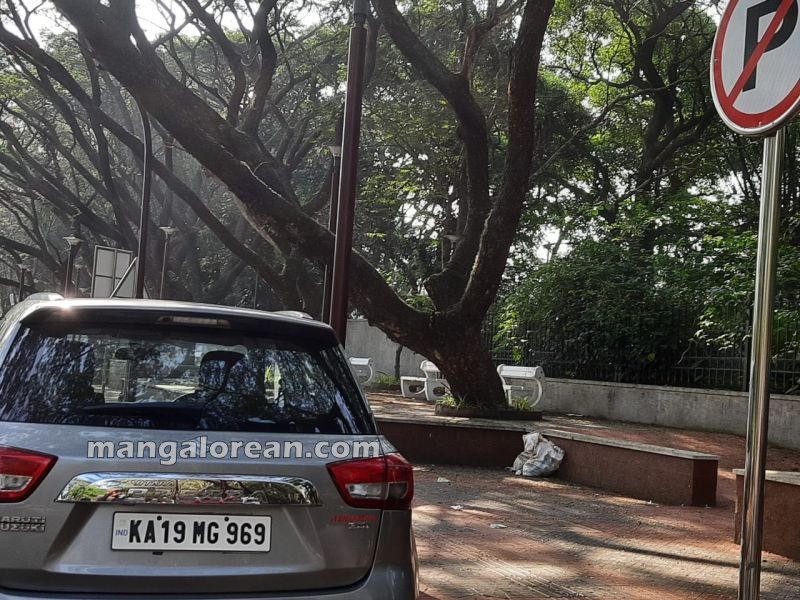 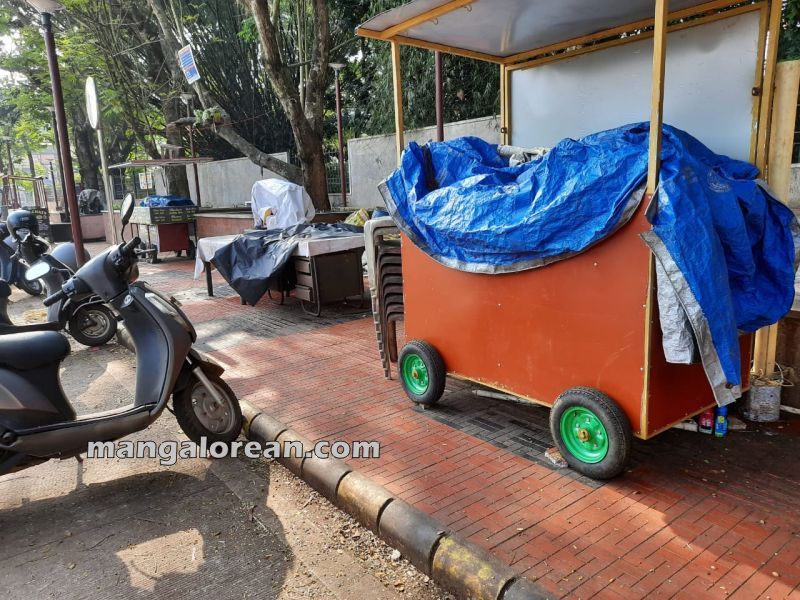 Just because our city’s engineers went abroad to learn about the infrastructure and city’s development in countries like the USA, UK, Singapore and many others, you simply can’t implement foreign infrastructure here in Kudla, where we have a huge population, heavy traffic on congested roads, and added to that most of the good space is taken over by hawkers/street vendors and beggars. It’s very rosy to look at Copenhagen-Amsterdam and romanticize- but their socio-economic-cultural-governance is very different and rather impossible to replicate. We need to design roads according to CONTEXT and not COPENHAGEN or CHICAGO?

In conclusion, if our citizens can’t keep their surroundings clean, and ignore “Swachh Bharath Abhiyan ”, how can we ever think of having a Clean Mangaluru? We need to enforce strict laws and punish those who litter in public, then only we can look forward to “Swachh Bharath” and for that matter “Swachh Mangaluru”!- If not PM Modi’s “Swachh Bharath” will NOT be his dream come true! Let’s work together and see that we keep our surroundings clean. Remember we should learn from our mistakes to change, and not continue our old habits. And let’s remember to make “Namma Mangaluru, Swachh Mangaluru!”.