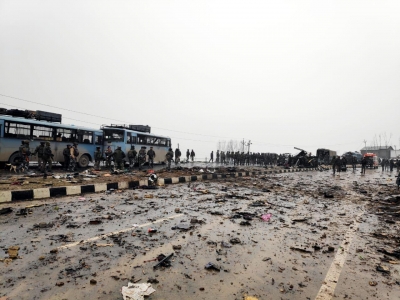 New Delhi: The year 2020 proved a fruitful year for the National Investigation Agency (NIA) as it cracked two major cases and filed charge sheets in the 2019 Pulwama terror attack case and the 2017 Bhima Koregaon violence case.

Following the delay in the charge sheet in the 2019 terror attack case, the opposition parties have questioned the government.

These are apart from the six arrested accused in the case.

The NIA filed the charge sheet along with the pictures and digital evidence of the Pulwama terror attack.

According to NIA officials, the agency has prepared a watertight case against the people named in the charge sheet along with all the irrefutable evidence, including their chats and call details to highlight the role of Pakistan.

The NIA has claimed that this attack was a plot hatched by the Pakistan-based terror group to project the attack as part of the home-grown militancy in Kashmir. The NIA has also accused several top commanders of the terrorist group in its charge sheet.

The NIA found that Mohd Iqbal Rather, a resident of Badgam in J&K was in constant touch with the Pakistan-based leadership of the JeM and was in communication with them over secure messaging applications and was also part of the transportation module of the terrorist organisation.

The NIA has also claimed that JeM chief Azhar, along with his brothers Asghar and Alvi, was continuously giving directions and guidance to the Pakistani terrorists who had infiltrated into India using Pakistani SIM cards and WhatsApp calls and messages, both before and after the 2019 Pulwama terror attack in which 40 CRPF troopers were killed.

The Pakistani SIM cards were even active after the 2019 Pulwama terror attack.

The NIA also intercepted the WhatsApp messages and the photographs shared with their handlers in Pakistan.

The NIA also alleged that the JeM had initially planned the attack for February 6, 2019, but due to heavy snowfall and closure of the highway, the attack was deferred to February 14.

The NIA also got the assistance from the FBI to crack the WhatsApp calls and messages and other messages shared on other secure messaging platforms.

The NIA alleged that they had also planned to carry out another suicide attack which was averted due to the Balakot airstrikes by the Indian Air Force and due to the killing of the main conspirator Farooq by security forces.

Further, due to international pressure, Pakistan had to lay low, the NIA said.

The NIA further alleged that during investigation it was revealed that there was a “well-crafted mechanism” by the Pakistani establishment to push terrorists into the Indian territory from the launch pads located in Pakistan’s Shakargarh opposite Samba-Kathua sector in Jammu.

The anti-terror probe agency conducted meticulous, scientific and detailed analysis of more than 10,000 pages of communications made by various accused, and went through reliable oral, documentary and material evidence before filing the charge sheet.

NIA’s investigation revealed that the tentacles of conspiracy were not only spread throughout the country, but also extended beyond India,” the official said.

According to officials, incriminating documents recovered from the accused include their “discreet communications” with other Maoist cadres regarding conspiracy related to the violent incident of Bhima Koregaon as part of their well chalked-out strategy.

The NIA claimed that the accused used “discrete codes” for secret communication among themselves to avoid detection by the security forces regarding their conspiracy and planning.

The investigation further revealed a systematic network of Maoists operating for supply of arms and ammunition having close nexus with other banned organisations within and outside India, the NIA claimed.

The NIA had registered a case on January 24 this year. The case pertains to inciting people and giving provocative speeches during the Elgar Parishad organised by the activists of Kabir Kala Manch at Shaniwarwada in Pune on December 31, 2017, which promoted enmity between various caste groups and led to violence resulting in loss of life and property and state-wide agitations in Maharashtra.

The NIA registered a case after the gold smuggling case first surfaced when P.S. Sarith, a former employee of the UAE Consulate in Kerala, was arrested by the Customs Department on July 5 when he was allegedly facilitating the smuggling of 30 kg gold in a diplomatic baggage from Dubai to Thiruvananthapuram.

The case became murkier when the involvement of Swapna Suresh, a former employee of the UAE Consulate later employed with the Kerala IT Department, came to light. Her links allegedly stretched to the Chief Minister as she had connections with M. Sivasankar, Kerala’s senior IAS official and secretary to CM Pinarayi Vijayan.

She later revealed that Sivasankar was her mentor.

The NIA has made several arrests in the case and a team of the agency also travelled to Dubai to question several of the people linked in the case.

The NIA also made progress in the narco-terror case related to the smuggling of drugs from Pakistan to India, the Khalistani module case against members of the Sikh for Justice, ISIS Delhi module case among few to name.