Home Agency News There will be more strikes to come: Russia’s Medvedev 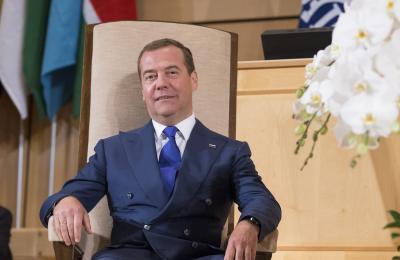 There will be more strikes to come: Russia’s Medvedev

Moscow: In wake of the large-scale air strikes across Ukraine, former Russian President Dmitry Medvedev warned “there will be others”, the media reported.

The close ally of Russian President Vladimir Putin signalled that the ramp up in attacks could be the start of a further escalation in the war on Russia’s part, BBC reported.

“Ukraine would be a constant, direct and clear threat to Russia,” he wrote. “The aim of our future actions must be the full dismantling of the political regime in Ukraine.”

A statement of this nature suggests that, if this is indeed the view of the Kremlin, Russia may want to push on with the war until it makes sure the whole of Ukraine is back in Russia’s orbit, BBC reported.

Russian President Vladimir Putin has warned that any further Ukrainian “terrorist” assaults on Russian soil will be met with a significant military response. He was speaking after a wave of missiles struck Ukraine on Monday morning, RT reported.

Putin confirmed that Russian troops carried out “massive strikes with long-range precision weapons on Ukrainian objects of energy, and military control and communications”. The response came two days after an explosion damaged the strategic Crimean Bridge, for which officials in Kiev claimed responsibility.

“If there are further attempts to conduct terrorist attacks on our soil, Russia will respond firmly and on a scale corresponding to the threats created against Russia,” Putin added, RT reported.

Putin stated that Russia was retaliating for a number of attempts to strike Russian infrastructure that have been attributed to Kiev.