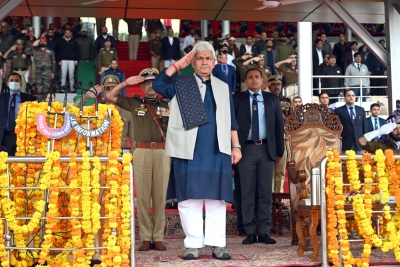 Addressing the police commemoration day parade at the Zeewan complex of the armed police, Sinha said, “Those trying to justify innocent killings for personal gains are challenging the integrity and sovereignty of the country.

“I don’t hesitate to say that if needed such people will have to face action according to the law,” he said. The Lt Governor did not name anybody, but he was obviously alluding to the recent statement of former Chief Minister Dr. Farooq Abdullah in which he said that killings will not stop in J&K unless justice is given.

Sinha said that the J&K Police are the country’s best police force that has been fighting at multiple fronts.

“Be it maintaining law and order, fighting terror, managing traffic or addressing day to day crime, the J&K Police have been doing a commendable job.

“Those trying to disrupt peace will have to pay a heavy price.

“J&K Police have offered supreme sacrifices in establishing peace and rooting out terrorism. There are still some elements who try to disrupt peace at the behest of the neighbouring country. They will have to pay a heavy price. Police will avenge every drop of tear shed by the families of the martyrs.

“Best tribute to martyrs will be to push the last nail into the coffin of terrorism which is on its death bed and won’t survive for long,” he said.

He said the society as a whole needs to boycott the elements who are still trying to disrupt peace in J&K.

He said police is being provided with all the latest gadgets and innovative means to fight terrorism and other challenges.

“The administration is committed to the welfare of families of police martyrs through welfare schemes, financial assistance and children’s education.”, he reiterated.