Home Agency News Thousands of BJP workers to welcome Modi at airport on return from... 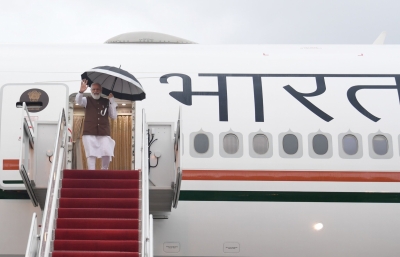 New Delhi: Thousands of BJP workers in the national capital on Sunday gathered at the Palam Airport technical area to give a grand welcome to Prime Minister Narendra Modi on his return after a successful visit to the US.

Delhi BJP vice president Virendra Sachdeva told IANS that thousands of BJP workers have gathered at the airport to accord grand welcome to Prime Minister Modi on his return from another successful visit from abroad.

According to Sachdeva a big stage has been set up where Prime Minister Modi will come and accept greetings from people. “A stretch of three kilometres from the airport has been decorated to greet the Prime Minister. Our workers and common people are standing on both sides of the roads with cutouts and posters of the Prime Minister,” he said.

Delhi BJP president Adesh Gupta will welcome the Prime Minister on his return. It is learnt that all the BJP MPs and MLAs have been asked to reach the airports to accord a grand welcome to the prime minister.

Office bearers of BJP’s Delhi unit and its three mayors also have been asked to reach the airport.