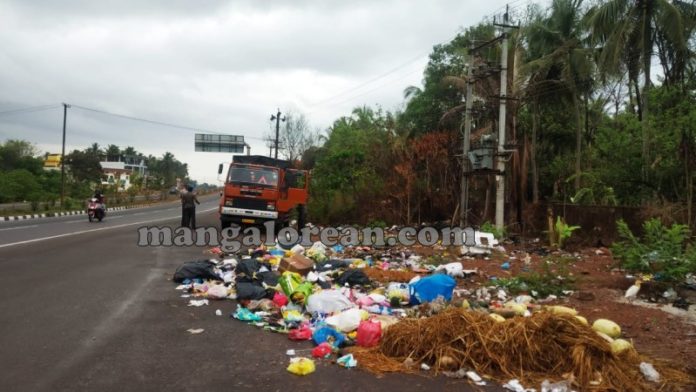 Mangaluru: Following close on its heels after Yours Truly of Team Mangalorean had published an article ” Haven of Garbage! United Colors of Waste Decor NH66 from Yekkur to Kannur ” (click on this link and be a witness to the wide array of waste?) on 15 May 2019, highlighting the pathetic condition of NH 66, all the way from the outskirts of Mangaluru City until certain parts of Kerala, which is filled with piles of garbage- couple of days one of our friend Anil S, captured few pictures of a trucker and the cleaner dumping garbage on the same stretch of the highway. And now we know who are the culprits- apart from Commuters, even the motorists who ply on that Highway.

And the truck had the registration number of Maharashtra, (MH 13 CU 4814) and this was the message sent us by Anil S in whatsapp, saying, “Spotted this truck disposing off thrash on NH 66 flanks near Beeri on 3 June morning. Their (truck crew) justification was that the place was already a dumping ground and hence they could also dump. Angered at their comments, I made them to pack off. Incidentally the area falls under Mangaluru, (formerly Ullal) Assembly constituency represented by Urban Development Minister U T Khader and is under the limits of Kotekar Town Panchayat. As an MLA as well as the minister of ULBs, U T Khader has miserably failed to ensure proper waste disposal, or taken any action to rectify the issue”

Well said by our friend Anil S. Also how many times might have District Minister-in-charge U T Khader traveled on National Highway 66 on his way to see or meet his friends in Kerala, or to his constituency in Ullal? While talking about safety hazards and health hazards, how many times might have U T Khader taken any action against this garbage menace? Also probably there could be many other ministers or politicians or educated people traveled on this stretch, and have turned a blind eye towards this dirty scenes of waste scattered all along this highway. ? But sadly, the District Minister-in- charge, Higher officers and other dignitaries, nobody have ever tried to resolve the basic problem. Seems all these politicians have turned a blind eye to this pathetic condition of garbage filled NH 66.

Last time when I made an article on the same issue, I was surprised to see the pathetic condition of this highway with garbage piled up at every 1/4 or 1/2 Km or so- and the best part is that, there was more garbage dumped where signs were posted “NOT TO DUMP GARBAGE”?. How ignorant and careless people could be towards Swachatha of India. The scenes of all these garbage piled areas will no doubt shatter the dreams of PM Narendra Modi’s “Swacch Bharath Abhiyan”. And by any chance PM Modi happens to travel on this stretch of the Highway he would not only get hurt, but freak out too, looking at the disgraceful manners of the so called Indians If the garbage spots start from Yekkur, they continue along the NH 66, and could probably seen until Kannur, or beyond, that I assume.

Yes, its true that as the population increased, and also apartments/education institutions/hotels etc have increased, the quantity of waste also doubled but the concerned authorities have failed to find a place to dump garbage for the people living along the NH 66 and also those traveling on that highway. This stretch of highway gives unusual view of garbage scattered all over the place. The road, which is a state highway shows the irresponsibility of representatives. I even witnessed people tossing out garbage from the moving vehicles, and also residents and shops employees dumping garbage along the roadside, and stray dogs, including crows and birds feast on this garbage. Among the garbage, you could also find used syringes, cotton, medicine bottles/ used tablets wraps etc thrown by some hospital or hospitals in that vicinity.

This ugly scene on the highway surely does sends a bad image of India and also of the district to all the visitors from other countries who travel on this highway during their sight seeing tour. Despite the hype around the cleanliness drive after Prime Minister’s clarion call for Swaccha Bharath Abhiyan, filth is still visible on this national highway, and on other highways. With the dumping of garbage on both sides of the national highway at various locations, many a time people using the road are put to inconvenience by the stench that emanates from the garbage dumped indiscriminately. In spite of awareness on why use of plastic should be avoided, people continue to use plastics. It forms a major chunk of the garbage dumped along the national highway. Even people have been dumping garbage from the Nethravathi Ullal bridge into the running river below, in spite of a sign posted nearby not to dump garbage.

Yes, we agree that disposal of garbage continues to be a challenge faced by the civic authorities. Officials say that they alone can not keep the city clean. A change in attitude among people towards the issue of cleanliness is need of hour. In spite of many awareness programmes on ‘Swachh Bharath’ people have the habit of dumping garbage on the highways, streets and pavements. Adding to this, construction debris is also dumped. Also looking at the outgrown grass and other vegetation beside the highway it seems like Swachh Bharath Abhiyan is not clearing the garbage alone.

It’s time that our elected state representatives take quick action on this garbage menace on NH 66, and start cleaning up soon before the garbage piles up in heaps, and also before monsoon starts. Apart from the last article, I hope this report will once again awaken some of our “Beloved?” leaders, and the rest of the political and district administration /PWD / NHAI honchos to take act fast and do the needful. Thank You!

Haven of Garbage! United Colors of Waste Decor NH66 from Yekkur to Kannur

NH 75 Stretch between Farangipete and Bantwal is Haven of Garbage