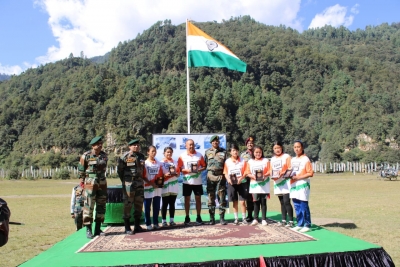 Itanagar: The Indian Army on Saturday paid tributes to the brave hearts of Namka Chu battle, fought on October 20, 1962 against the Chinese. Homage paid to the brave hearts by conduct of traditional military homage at the Surwa Samba War Memorial which was followed by a Namka Chu Run in the sacred battlefield.

Local people wholeheartedly participated in the event. Octogenarian Pem Dorjee, who was a porter with the Army in 1962 and had ferried heavy loads on his shoulders, was felicitated by Senior military dignitaries as a mark of gratitude by the Indian Army.

Defence spokesman Lt. Col Mahendra Rawat on Saturday said that Namka Chu war remained etched in history as an epic battle which was fought under most challenging conditions and overwhelming odds including no road or track connectivity, limited ammunition, practically no artillery support and against an enemy who outnumbered Indian forces and was equipped with superior weapons with good logistic support.

Despite these herculean challenges, the Indian forces fought with such tenacity that even the enemy in their own writings have accepted that they were inflicted with severe damaged and suffered maximum casualties in this battle.

Lt. Col Rawat said that in the month of September 1962 certain isolated incidents had been reported and because of which two battalions of 7 infantry were moved post haste from Tawang while two battalions awaiting de-induction to peace areas after completing difficult tenures were practically deboarded from their trains in Assam and rushed to Namka Chu sector. Ahead of Tawang, the battalions were inducted by only foot from altitude of 6000 feet rising to more than 15000 feet. The chilling winter Nights were spent in the open before occupation of defences along the Namka Chu.

In absence of Artillery support, four guns were airdropped and after which only two could be put in action. The Chinese assault along the Namka Chu against Indian defences which were based on Sangars which are makeshift defences using stones and boulders, commenced in early hours of October 20.

The Indian forces in spite of being heavily outnumbered and facing preponderance of artillery support fought a fierce battle and gave the enemy a bloody nose. Every soldier stuck to his position knowing very well that ammunition was not there for even one day’s fighting. True to the traditional valour of the Indian Army the gallant men fought to the Last man Last round. The Nation could not have asked for more, the defence spokesman said.

“The grit and determination of Indian soldiers became very clear to the Chinese and today as the Army secures the borders the Chinese know well what the response of the Indian Army will be in case they think of any misadventure.” The Indian response at Galwan was also a refresher for them, Lt. Col Rawat pointed out.

The award of seven Mahavir Chakras, 11 Vir Chakras, 13 Sena Medals and 20 Mention-in-Dispatches to the four battalions — 2 Rajput, 1/9 Gorkha Rifles, 9 Punjab and 4 Grenadiers bears testimony to the gallantry and grit of the Namka Chu Brave hearts.