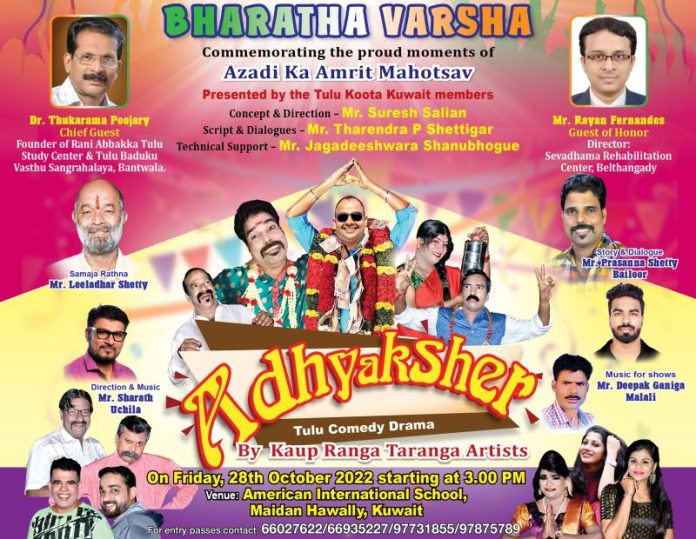 Tulu Koota Kuwait (TKK) was founded in the year 2000 with the motto, “Unity through Language”. The organization has grown steadily and successfully over the past 22 years to new heights, with members from the Tulu-speaking community of Coastal Karnataka and it is affiliated with the Indian Embassy of Kuwait. TKK strives continuously to preserve and promote the Tulu language, the rich cultural diversity, ethnicity, and customs of coastal Karnataka.

Tulu Koota Kuwait has been always at the forefront of helping the needy through charity activities. In the year 2022, Tulu Koota Kuwait organized various charity works. On the welfare front, TKK has helped the needy with education grants under ‘project education’ in India and Kuwait. In addition, a blood donation camp, garden cleaning program, indoor kabaddi, and throwball sports events were organized by TKK. TKK is proud to present the annual cultural program Tulu Parba -2022 on October, 28th 2022, at American International School, Maidan Hawally, with full grandeur. “Bharatha Varsha, a grand dance drama will be performed by over 100 TKK members on stage live, to depict the contributions of key personalities in commemoration of Azadi Ka Amrit Mahotsav, and to boost the national spirit. A Tulu drama Adhyaksher will be performed by a team of guest artists of Ranga Taranga, Kaup from India. The program would be a fine cultural feast with complete entertainment for the viewers.

The President Mr Sanath Kumar Shetty and all the committee members of Tulu Koota Kuwait invite everyone to come with family and friends and enjoy this show.