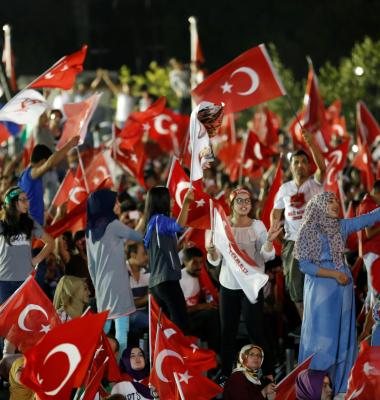 Ankara: Turkish police detained 543 people in an operation across 59 provinces for their suspected links to a network accused by the government for orchestrating the failed 2016 coup, Interior Minister Suleyman Soylu said.

The eight-month-long investigation aimed at deciphering the structure, recruitment process of new personnel and financial resources of the Gulen Movement, which the Turkish government accuses of infiltrating into the state bureaucracy and attempting the coup, Xinhua news agency quoted the Minister as saying to reporters here on Tuesday.

So far, 543 out of 704 wanted by the prosecutors have been detained, Soylu said, adding that 17 of the detained were working in the public sector.

The operation came after information showed that high-profile members abroad of the Gulen movement instructed members inside Turkey to “prevent breakups from the organization, restructure the private units and financial activities, and continue activities in the country”, the Minister said.

The members of the organization transferred money by cargo, ATMs and physical meetings, Soylu explained.

The Gulen movement, which mainly runs schools worldwide, is a community of people named after Muslim preacher Fethullah Gulen, who is regarded by followers as a spiritual leader.

Turkey accuses the US-based Gulen of masterminding the coup on July 15, 2016, in which at least 250 people were killed.

The country has requested the extradition of Gulen, but the US is reluctant to extradite the self-exiled Islamic cleric, saying Ankara has not presented sufficient evidence against him.

The Turkish government has been massively cracking down on suspects with links to the network since the failed coup.