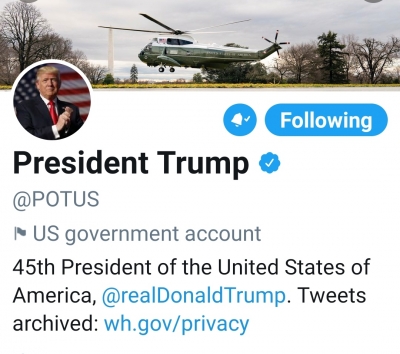 New York: Social media giant Twitter announced that it is banning US President Donald Trump from its platform, citing “risk of further incitement of violence”.

On Twitter, Donald Trump’s handle is now an empty white page, frozen with 51 followed accounts and 88.7 million followers and two words on the center of screen saying “Account suspended”.

“After close review of recent Tweets from the @realDonaldTrump account and the context around them a” specifically how they are being received and interpreted on and off Twitter a” we have permanently suspended the account due to the risk of further incitement of violence,” Twitter said in a statement.

Late January 6, Trump was locked out of his account for 12 hours after a violent mob loyal to him stormed the US Capitol to try to stop Congress from certifying President-elect Joe Biden’s victory.

On the same afternoon, Trump posted a video on Twitter calling his supporters “very special” people. Five people, including a Capitol Police officer, are reported dead after the violence on January 6.