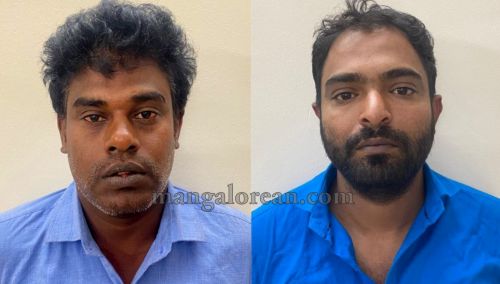 Udupi: The Kota Police arrested two inter-district accused in connection with the theft in various schools and colleges in Udupi.

The arrested have been identified as Kumarswamy (59), from Salem in Tamilnadu and Jahid Sinan (32), a resident of Hejamadi.

According to the police, from the past five to six months, serial theft cases were reported in schools and colleges in Udupi. In this connection, cases were registered in various police stations.

Under the direction of Udupi SP Akshay M, teams were formed to nab the accused. The teams collected necessary information as well as CCTV footage and other technical data. On November 21, the Kota police waylaid a motorbike and took the rider and the pillion into their custody. During interrogation, the accused confessed their crime. The police recovered a motorbike, 2 mobile phones and Rs 10,000 cash from their possession.

Accused Kumarswamy was involved in various house thefts and cases have been registered against him in the Bhatkal Town, Honnavar and Belur police stations of Hassan district. Kumarswamy and Jahid Sinan both are involved in 27 school and college theft cases under the Byndoor, Kollur, Shankarnaryana, Kundapur, Brahmavar, Hiriyadka, Udupi Town, Malpe, Karkala and Padubidri Police station limits.