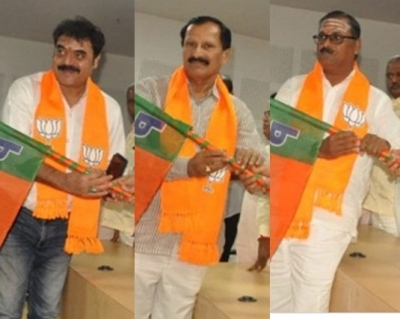 Bengaluru: Ahead of the assembly elections in Karnataka, two former Congress leaders on Thursday joined the Bharatiya Janata Party (BJP).

Speaking on the development, Bommai said: “It is an indication of the political winds blowing in favour of the BJP in the state.

“Despite serving the Congress party for several years, they are now convinced that their services will not be recognised in that party… and they have decided to join the BJP and serve the state,” he added.

The entry of leaders like Muddehanumegowda and Shashi Kumar is expected to boost the BJP’s chances in the assembly elections scheduled to be held in Karnataka in the first half of 2023.

Former Congress MP from Tumkur, Muddehanumegowda was forced by his party to vacate his seat for JD-S supremo H.D. Devegowda in the 2019 Lok Sabha polls.

While Devegowda lost the poll, the Congress did not keep its word of sending Muddehanumegowda to the Rajya Sabha.

Actor Shashi Kumar was prolific in the 90s and represented the Janata Dal-United in the Lok Sabha from Chitradurga in 1999.

Subsequently, he joined the Congress and thereafter the Janata Dal-Secular (JD-S).