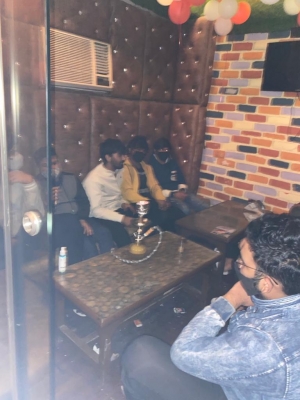 New Delhi: Two hookah bars running illegally in the city’s North Rohini and Prashant Vihar areas have been busted, and 65 persons, including their owners and managers, arrested, police said on Sunday.

On January 1, police conducted a raid in shop No 210, RG Complex, DC Chowk Market Sector-9, Rohini where an illegal hookah bar with the name of Uptown Cafe was found operational and 22 persons were found dancing and smoking hookahs in blatant violation of Covid-19 norms. Besides this, there were four persons who were serving hookahs to customers and they were also arrested.

The owner was identified as Sahil, 23, a resident of Alipur. A total of 10 hookahs along with chimney and pipe, 1 packet royal smoking exotic flavoured ‘sheesha’ molasses, electric heater, 10 coils and other material were also seized.

On January 2, police conducted a raid in Mud House Restaurant and Lounge, Balaji Plaza, Sector-8 Rohini where an illegal hookah bar was found operational and 32 persons were found inside smoking.

“Besides this, 6 persons who were serving the hookah to customers also got arrested. Out of 32 persons, 20 were men and 12 were women and there were three minors among them,” said DCP Rohini, P.K. Mishra.

All three owners — Amit Dhankar, Sanjay Aggarwal and Pardeep Singhal — have been identified and appropriate legal action has been initiated against them. A total of 12 hookahs along with chimney and pipe, 1 packet filter, 2 packets coal, 2 packets (open box) tobacco products were seized.