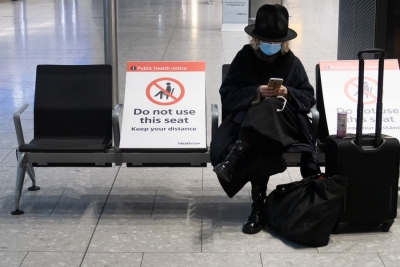 UK faces new lockdown with tougher battle ahead against Covid-19

Announcing the lockdown, the third of its kind since the pandemic began in the country, British Prime Minister Boris Johnson told the nation on Monday in a televised address that new tough measures were needed to control the coronavirus, protect the National Health Service (NHS) and save lives, the Xinhua news agency reported.

He said a drastic jump in cases has been attributed to a new variant of coronavirus, which is said to be about 70 per cent more transmissible.

With no specific end-date for tougher restrictions set by Johnson, controls across England might last up to several months.

The coming weeks will be the hardest yet since the virus struck, Johnson warned.

Meanwhile, British ministers are considering introducing a requirement for international arrivals to have a negative Covid test before travelling to Britain in a bid to tackle the rising tide of infections, the Evening Standard newspaper reported Tuesday.

Chief medical officers across all regions of Britain advised politicians that the Covid-19 threat level should move from Tier Four to Tier Five, indicating that if action is not taken, the NHS may be soon overwhelmed.

Johnson confirmed that hospitals are now under more pressure than at any other point throughout the pandemic.

Lawmakers are being recalled to the House of Commons, the lower house of the British Parliament, for a special sitting Wednesday to give retrospective approval to the new controls in England.

Earlier on Tuesday, British Cabinet Office Minister Michael Gove indicated that the new lockdown in England is likely to remain in place into March at least.

“I think it is right to say that as we enter March we should be able to lift some of these restrictions but not necessarily all,” Gove said.

Also on Tuesday, Professor Andrew Hayward from the University College London (UCL) told the BBC that while the new lockdown would clearly save tens of thousands of lives, it was not clear the restrictions would be sufficient to stop its spread.

“We need to learn from the last lockdown and particularly some of the things we saw,” he said.

In England, people are only allowed to go to work if it’s impossible to work from home, such as construction workers. They are allowed to go out to shop for necessities including food and medicines, and to exercise, ideally once a day and locally.

Meanwhile, all schools and colleges will close from Tuesday (except for vulnerable children and those of key workers), and switch to remote learning until the middle of February.

On Monday, Scottish First Minister Nicola Sturgeon announced that Scotland would enter a new lockdown from midnight on Monday, as well as a shutdown of schools until February 1.

Alongside the gloomy message, Johnson offered a message of hope that the virus will be defeated as the country continues to roll out the vaccines.

Urging people to pull together, Johnson said: “With every jab that goes into our arms, we are tilting the odds against Covid and in favour of the British people.”

On Tuesday, British Chancellor of the Exchequer Rishi Sunak announced a support package worth 4.6 billion pounds (about $6.25 billion) to help support businesses impacted by the new lockdown.

Meanwhile, Keir Starmer, leader of the main opposition Labour Party, criticised Johnson’s handling of the pandemic, but said his party would on Wednesday back the new measures in the House of Commons.

“It’s going to be a struggle and we need to make this work,” said Starmer in a television interview on Tuesday.

Tony Danker, director-general of the Confederation of British Industry, said: “It is absolutely essential that we all put the health of our citizens first, and businesses will continue to step up in the national interest to support the NHS, employees and customers in the weeks ahead.”

“In tandem we need to acknowledge that the economic impact of these new restrictions is significant,” Danker added.

The lockdown came as another 58,784 people in Britain have tested positive for Covid-19, marking the highest daily increase in coronavirus cases since the outbreak of the Covid-19 pandemic in the country, according to official figures released Monday.

It was the seventh day in a row that new cases have topped 50,000 in Britain. The total number of coronavirus cases in the country now stands at 27,13,563, the data showed.

Another 407 have died within 28 days of a positive test, bringing the total number of coronavirus-related deaths in Britain to 75,431, the data showed.

To bring life back to normal, countries such as Britain, China, Germany, Russia and the United States have been racing against time to develop coronavirus vaccines.