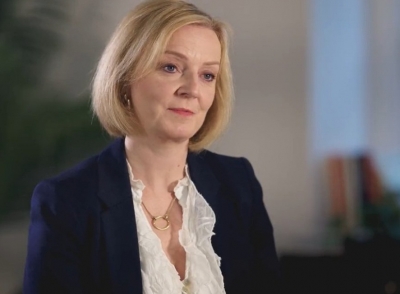 London: UK Prime Minister Liz Truss has sacrificed her Finance Minister and closest political ally just weeks into her premiership in order to save her own skin, media reports said.

On Friday morning, Britain’s Chancellor of the Exchequer, Kwasi Kwarteng, was summoned a day early back to London from the US straight to Downing Street, where he was relieved of his duties.

Kwarteng being gone, however, does not mean that Truss is out of the woods, CNN reported.

The pair had written about their shared view of a low-tax, high-growth Britain in a book authored by a group of Conservatives as far back as 2012. Kwarteng and Truss were in lockstep in their vision for Britain; removing him from office is a tacit acceptance that her economic plan has failed, it said.

Truss swiftly replaced Kwarteng with Jeremy Hunt, a former cabinet minister of multiple briefs who has stood for the leadership twice. She described him as “one of the most experienced and widely respected government ministers and parliamentarians”.

Views are mixed on whether the new Chancellor will be a stabilising influence on either the party or Truss. Some Conservative MPs think that Hunt, who served as Health Secretary, Foreign Secretary, and Culture, Media, and Sport Secretary under previous governments, will bring unity to a party that is still recovering from the summer’s bruising leadership contest.

He is respected by both the left and right of the party and has a calm, reassuring and familiar nature that appeals to a certain type of Conservative.

However, he is also easy for the opposition Labour Party to attack. Hunt-skeptics point out that his record in government is patchy, CNN reported.

What Conservative MPs are most worried about is that Truss’s credibility is blown and her authority gone. She has appointed a Chancellor whom she cannot blame for any future hiccups, and now looks seriously weak in the face of a reenergised opposition Labour party, which is surging ahead in the opinion polls.

The next general election doesn’t constitutionally need to take place until January 2025, though no one is suggesting Truss will survive anywhere near that long. Yet getting rid of the party’s fourth leader in just over six years in the short-term would be difficult, even if things continue to go south, CNN reported.

Some of her law makers fear that crowning another leader without consulting the public – just months after replacing Boris Johnson in a similar fashion – could make the party look even worse in the eyes of the public.

All of which means that for now, Truss and her party are stuck. And unable to make major reforms, without key allies and reaching across the party for the sake of unity, Truss’s government runs the risk of looking like a caretaker government that is simply waiting for someone else to take over, CNN reported.