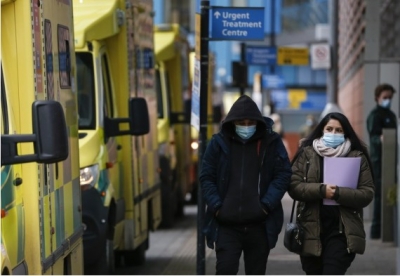 London: A once-a-decade census has been carried out in England, Wales and Northern Ireland, trying to provide insights into the impact of the Covid-19 pandemic and Brexit on people’s lives.

The census on Sunday, organised by the British Office for National Statistics (ONS), asked households to fill in an online questionnaire about every person living at the property, including their age, race, occupation and relationship status, Xinhua news agency reported.

Local media reported that the census includes voluntary questions for over-16s on gender identity and sexual orientation for the first time. Besides, it is also the first time people are asked whether they have served in the armed forces.

The ONS said the census aims to gather vital information to help plan services such as transport, education and healthcare.

By law, all households should complete or be accounted for in the census. Those who fail to fill it in or give false information can be fined up to 1,000 pounds (about $1,387).

Because of the Covid-19 pandemic, this year people in Britain are asked to complete the survey online, with unique access codes being sent out to households. In Scotland, the census has been delayed to March 2022 as a result of Covid-19 restrictions.

Census field officers will follow up with households after Sunday if people have not completed their questionnaire. The census results will be available within 12 months, although personal records will be locked away for 100 years.

Ian Diamond, Britain’s national statistician who chairs the Social Security Advisory Committee, told local media that the 2021 census could be the last one ever to be carried out, as he was examining cheaper and “more quickly” alternatives to the 10-yearly compulsory questionnaire delivered to every British household.

Britain’s first official census was carried out in 1801, according to data.

On February 22, British Prime Minister Boris Johnson announced his long-anticipated “roadmap” exiting the lockdown. The March 8 reopening of schools was the first part of the four-step plan which is expected to see all legal restrictions in England being removed by mid-June.

Other parts of Britain, including Wales and Northern Ireland, have also unveiled plans to ease the restrictions.

Experts have warned Britain is “still not out of the woods” amid concerns over new variants and the risks of the public breaching restriction rules.

To bring life back to normal, countries such as Britain, China, Germany, Russia and the United States have been racing against time to roll out coronavirus vaccines.