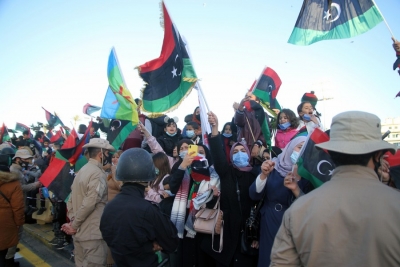 United Nations: A United Nations envoy hailed the endorsement of a national government in Libya after years of “paralysis and internal divisions,” and urged the Security Council to provide fresh support by deploying UN ceasefire monitors.

“The House of Representatives on March 10 overwhelmingly endorsed the Government of National Unity (GNU),” Jan Kubis told the Security Council during his first briefing as the special envoy of the secretary-general for Libya, and head of the United Nations Support Mission in Libya (UNSMIL) on Wednesday, Xinhua news agency reported.

Over 130 members gathered for the session, which “in itself was a historic political milestone,” he said, pointing out that the new cabinet reflects different regions and constituencies.

Oil-rich Libya had descended into multiple crises after former ruler Muammar Gaddafi fell in 2011, with the country essentially divided between a UN-recognized Government of National Accord based in the capital Tripoli, and a rival administration, led by self-styled Libyan National Army General Khalifa Haftar.

After more than a decade of conflict and instability, the special envoy said that an emerging political will for unification had come through Libyan dialogue and decision-making, “grounded in the wishes of the people to finally end the divisions and confrontations” to reclaim their country and “reinstate its unity and sovereignty.”

He stressed that UNSMIL “embraces” the interim authorities’ key priorities, including advancing the full implementation of the ceasefire agreement, delivering basic services to Libyans and fostering human rights-based national reconciliation.

Based on a “legal and constitutional framework,” the special envoy outlined guidelines for presidential and parliamentary elections and urged officials to start working on election laws without delay — a high bar, given current divisions.

The GNU has “a distinct role” to facilitate a secure environment in which to hold elections, and in facilitating the work of the national elections commission, said Kubis.

“The Libyan electoral authorities are exerting commendable efforts to hold municipal council elections despite COVID-19 and a precarious security environment,” he said, flagging that UNSMIL will continue its work in strengthening “democratically elected municipal councils to provide services, build social cohesion and improve the lives of vulnerable populations.”

“While the ceasefire agreement continues to hold, there are reports of ongoing fortifications” and new defensive positions as well as the “continuous presence of foreign assets and elements,” he said, naming ISIL terrorist fighters, among others.

“It is important to continue to support the authorities to address this ongoing threat, act against international terrorism and to fight unlawful armed groups and organized crime networks plaguing the country, which is critical for the stability of Libya, for the stabilization of Sahel,” he added.