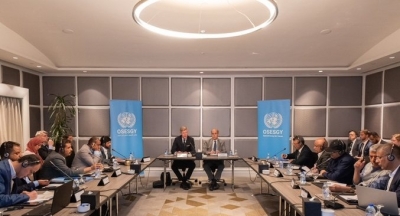 Aden (Yemen): UN Special Envoy for Yemen, Hans Grundberg said that he has submitted a proposal to the Yemeni warring factions to prolong the ongoing truce for a long period.

“The UN is awaiting the response of the Yemeni parties to our proposal,” he added on Saturday in an interview with the Al-Jazeera news channel, stressing the need for constructive cooperation between all sides involved.

“We hope to reach a final solution and a permanent ceasefire that ends the war in Yemen,” he said.

“We cannot reach results if there is no political will on the part of the Yemeni parties, and this is necessary for success,” Grundberg added.

The PLC chief called for opening roads and lifting the siege imposed by the Houthis on the Yemeni city of Taiz as a condition to go forward with extending the truce.

However, the Houthis in Sanaa have said they were still studying everything proposed regarding the truce, calling for lifting the restrictions imposed by the Saudi Arabia-led coalition on Yemen’s airports and ports.

The ongoing truce, which has been largely held, went into force for the first time on April 2 and was later renewed twice through October 2.

Although the truce has largely been upheld, the internationally recognised government and the Houthi group frequently trade accusations of violations, including sporadic armed attacks.

Yemen has been mired in a civil war since late 2014 when the Iran-backed Houthi militia seized control of several northern provinces and forced the Saudi-backed Yemeni government out of the capital Sanaa.

The war has killed tens of thousands of people, displaced 4 million, and pushed the country to the brink of starvation.