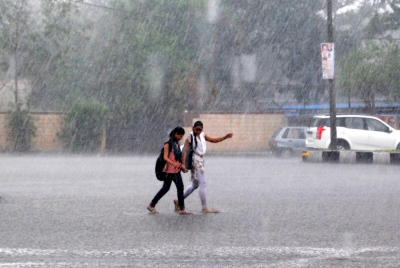 By the official end of the monsoon season, June 1 to September 30 this year, Madhya Pradesh had received over 23 per cent excess rainfall. In the previous two years rainfall was below par, whereas in 2019 the state had recorded over 45 per cent excess rain during the same period.

Bhopal: By the official end of the monsoon season, June 1 to September 30 this year, Madhya Pradesh had received over 23 per cent excess rainfall. In the previous two years rainfall was below par, whereas in 2019 the state had recorded over 45 per cent excess rain during the same period.

India Meteorological Department’s (IMD) data showed that the state has been witnessing uneven rainfall since 1996 and there has been inconsistency in average rainfall in both the western and eastern parts of Madhya Pradesh. For instance, during this year’s monsoon season, the eastern part of the state recorded 10 per cent excess rainfall, while the western part received over 35 per cent excess rain during the same period. If the state witnesses excess rainfall for two years, the situation will be quite different for the next two or three years and the average rainfall will be below average, the data showed.

According to the IMD data, the maximum number of rainy days is between 47 to 52 days, while the minimum rainy days are between 32 to 36 days in some parts of the state. Weather experts were of the view that climate change has become a serious issue and it needs to be paid more attention otherwise the situation would worsen for human beings.

Research reports of various institutions suggest that more than half of Madhya Pradesh faces the threat of adverse weather conditions on account of global warming and climate change. A survey conducted by the Environmental Planning and Coordination Organisation (EPCO) in 2014, warned that districts located in the north and north-eastern regions of the state will be most affected due to climate change in the next one or two decades.

The study predicts there are 34 districts in the state which may face adverse climatic conditions in future, and warned that the policies regarding forests, socio-economic aspects and infrastructure should be upgraded and improved. Weather scientists said evidence of climate change is already visible in Madhya Pradesh in many sectors such as agriculture, water resources, infrastructure, ecology, and biodiversity.

Gurudutt Mishra, a weather scientist who retired from the regional office of the India Meteorological Department in Bhopal in March this year, claimed that the decreasing green area and growing pollution from vehicles and concretization of cities are key factors. “Its good to see that farm production in Madhya Pradesh has increased manifold in the past one or two decades, but we should also know that use of farmland has increased by up to 38 per cent and it is more because water bodies or ponds in villages are either encroached or converted into farm land,” Mishra added.