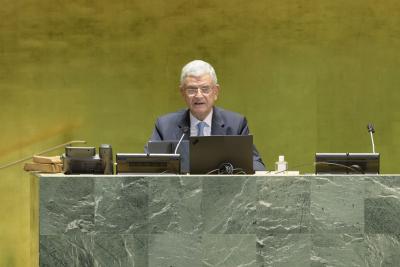 United Nations: President of the 75th session of the UN General Assembly (UNGA), Volkan Bozkir, has called for redoubling efforts to implement the Sustainable Development Goals (SDGs), while expressing the concern that the 2030 deadline might be missed.

Noting that the SDGs represent a blueprint for peace and prosperity, for people and the planet, now and into the future and implementing these goals will help to protect the international community against future catastrophes, he on Tuesday warned that “with the trajectory we are on, we are going to miss the 2030 deadline.”

“This Assembly and you – the member states who make up the United Nations – must redouble efforts to implement the SDGs,” Xinhua news agency quoted Bozkir as saying during the closing of the 75th UNGA session.

On multilateralism, the veteran Turkish diplomat said that “we must strengthen and unite behind the multilateral system.”

“Our world is increasingly globalised, interconnected and interdependent. As such, nationalistic solutions will not resolve our challenges,” he stressed.

“It is my belief that a multilateral strategy may have helped to guard us better against the spread of Covid and its variants and protect those most vulnerable,” he said.

Speaking about inequality, Bozkir said that “as we move forward, the UN and member states must focus on the gaps that were revealed to us.”

“This most critically includes the lingering and ever widening digital divide. If we wish to achieve Agenda 2030, inequality must be reduced,” Bozkir continued.

On how to bring the UN into a better play, Bozkir asked to strengthen the General Assembly.

“This body is critical to the success of multilateralism,” he said.

“We must prioritize and ensure we equip this Assembly – and the UN – with tools required to meet 21st century challenges.”

“Too much of our work is focused on procedures at the cost of substance,” Bozkir pointed out.

“We must continue to make efforts to restrict the number of high-level and mandated meetings during any given session. Quantity should not supersede quality,” he said.

“If we call a meeting a high-level meeting then we must ensure that there is in fact high-level engagement, and this necessitates a much more streamlined, priority driven agenda,” he underlined.

Bozkir also called for attention be given to the most vulnerable.

“The General Assembly must continue to give a voice to those most in need,” he said.