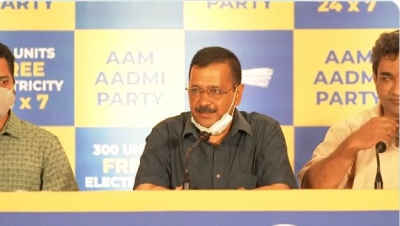 Panaji: Launching a string of poll promises ahead of the 2022 state assembly elections Delhi Chief Minister and AAP supremo Arvind Kejriwal on Wednesday announced free non commercial electricity to the tune of 300 units, 24-hour power supply and free electricity for farmers if the party comes to power in Goa.

Addressing a press conference in Panaji, Kejriwal who arrived in Goa on Tuesday also said that the promises were not a “chunavi jumla”, but a solemn guarantee by the party to the people of Goa.

“Each family will get 300 units free of cost per month. The bill will come to your home… 87 percent of Goa will start getting a zero electricity bill. This is my guarantee,” Kejriwal said, adding that all outstanding bills will be waived off and the power billing system will start off with a “clean slate”.

“We have done this in Delhi, we are not simply talking,” Kejriwal said. The Delhi Chief Minister also said that Goa would receive 24 hours electricity supply without any power cuts.

“Before we came to power in Delhi, there were 7-8 hours of power cuts in the summer. There are problems in Goa distribution network just like in Delhi. We changed the transformers and cables. It took two and a half years, but today we get 24-hours electricity. There is power but it just doesn’t reach homes,” he said, while also announcing free electricity for farmers.

The Delhi CM said that the move would ensure that women of the state — who hold household purse-strings — would be happy because more money would be saved.

Kejriwal also said that Goa’s politics was plagued by corruption and defection and said his party wanted to change the culture of politics in the state on its head. “Goa wants change. Goa wants clean politics,” the AAP national convenor said.

“Goa’s weather is beautiful. But your politics is very corrupt. Two years back, on July 10 (2019), 10 Congress MLAs switched over to the BJP. The people had given the mandate to the Congress but the government was formed by the BJP,” Kejriwal said.

“The party (BJP) that was given 13 MLAs, today has 28. The party (Congress) which had 17 MLAs now has 5. So why have elections at all? Elections become a farce. There is no meaning to elections. This is cheating. It is not right,” he also said.