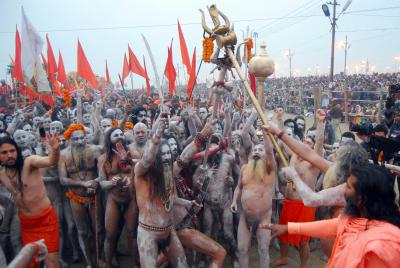 The Yogi Adityanath government in Uttar Pradesh has started preparing for the Maha Kumbh, scheduled to be held in Prayagraj in 2025.

Lucknow: The Yogi Adityanath government in Uttar Pradesh has started preparing for the Maha Kumbh, scheduled to be held in Prayagraj in 2025.

To chalk out the outline of the Maha Kumbh 2025, a high-level meeting will be held in Prayagraj on Thursday.

The Chief Minister is going to preside over the meeting along with senior officials of his office, chief secretary and heads of at least eight to 10 other departments who will play a crucial role in making the religious event successful.

According to the official spokesman, Yogi will go through the preliminary presentation during the meeting and give his inputs.

A basic blueprint of the event has been prepared.

“The scale and size of the event will be extremely grand. We are going to bring all the options on the table to make the event historic,” said a state government spokesman.

Senior government officials and heads of the public works, power, irrigation, urban development, health, home, housing and urban planning, transport, tourism, information among other departments, are expected to participate in the high-level meeting to note down the issues that require inter-department coordination and collaboration.

A senior officer said that help from the research students pursuing courses in civil engineering, environment, sustainable development and design will be taken during the preparation stages next year in order to conduct the event in a cost-effective manner with quality material.