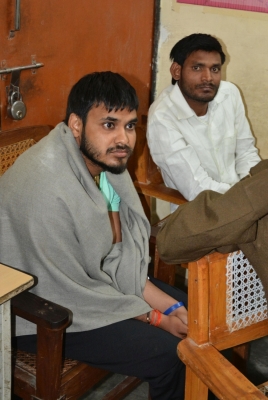 More than two-and-a-half months after the incident took place, a case has finally been registered against Anurag Prajapati, son of former jailed Uttar Pradesh Minister Gayatri Prajapati, for allegedly demanding money from a gym manager.

Lucknow: More than two-and-a-half months after the incident took place, a case has finally been registered against Anurag Prajapati, son of former jailed Uttar Pradesh Minister Gayatri Prajapati, for allegedly demanding money from a gym manager.

According to the complainant, Prajapati put a pistol to the gym manager’s head and demanded Rs 50 lakh as extortion.

The incident took place on August 24 but a case was registered in Aashiana on Saturday on the instructions of a court.

The complainant, Abhishek Yadav of Mans Nagar Colony in the area, alleged that Prajapati sought help from the Deputy Commissioner of Police and the Police Comissioner, Lucknow, but did not get any.

According to the FIR, Yadav was appointed as Managing Director of the gym run by Prajapati.

“I was appointed at a salary of Rs 15 lakh per annum with an incentive of 10 per cent. I kept paying the bill for the gym equipment but was not paid the money yet. In 2021, the gym remained closed due to the Covid-19 pandemic. I demanded the money from Anurag and was told to wait for a few months due to the financial crunch. By August 2, 2022, Anurag owed to me Rs 24 lakh for the salary and Rs 11 lakh for the equipment I had purchased for the gym. When I reminded him about the payment, I was asked to forget the money and work for the gym if I wished to live,” Yadav alleged.

He said he stopped working at the gym fearing serious repercussions.

“On August 12, I was asked to meet Anurag at a hotel in the area. When I reached there, Anurag’s men surrounded me. They were armed and asked me to hand over the keys of my car,” he added.

“The next day, Anurag and his men reached my house where they forced my mother to call me up and ask me to reach home and threatened her to give them Rs 50 lakh if she wanted to see her son alive,” Yadav alleged.

DCP, East Zone, Prachi Singh, said that an FIR under the charges of extortion by putting a person in fear of death or grievous hurt, breach of trust, dishonesty, punishment for voluntarily causing hurt, and intentional insults, and thereby giving provocation to any person has been lodged and the probe is underway.