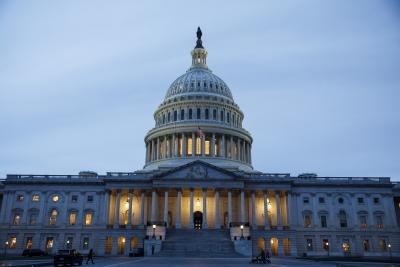 Washington:  The US Congress has reconvened for proceedings to certify President-elect Joe Biden’s victory in the November 2020 election, hours after sitting President Donald Trump’s supporters violently stormed the Capitol building.

“We condemn the violence in the strongest possible terms,” Xinhua news agency quoted Vice President Mike Pence, who is presiding over a session in the Senate, as saying late Wednesday night.

Senate Majority Leader Mitch McConnell, a Republican, also lashed out at protesters who stormed the Capitol and halted the Electoral College vote counting, while stressing that Congress will completion the certification of the results.

“We will not bow to lawlessness or intimidation. We are back at our posts. We will discharge our duty by the Constitution and for our nation. And we’re going to do it tonight.

“They tried to disrupt our democracy. They failed. They failed to obstruct this Congress. This failed insurrection only underscores how crucial the task before us is for our republic,” McConnell said.

“We’ll follow our precedents, our laws, and our Constitution to the letter. And we will certify the winner of the presidential election,” he added.

Addressing the Senate floor, Republican Senator Mitt Romney said the violence was “an insurrection incited by” the President.

“We gather due to a selfish man’s injured pride, and the outrage of supporters who he has deliberately misinformed for the past two months and stirred to action this very morning. What happened today was an insurrection incited by the president of the US,” The Hill news website quoted the 2012 Republican presidential nominee as saying.

“Those who choose to continue to support his dangerous gambit by objecting to the results of a legislative Democratic election will forever be seen as being complicit in an unprecedented attack against our democracy.”

Meanwhile, members of the House of Representatives have also resumed their session.

Earlier on Wednesday, the two chambers were separately debating an objection to the counting of Arizona’s electoral votes before police placed a lockdown on the Capitol due to the breaches that also led to the killing of a woman in gunfire.

The chaos resulted in a lockdown and eventual evacuation at the Capitol.