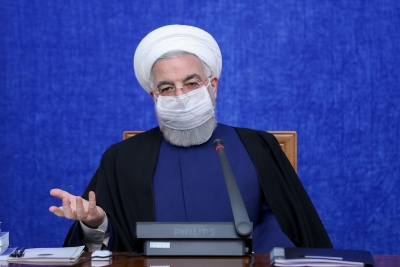 Iran “has been facing an economic terrorism since three years ago. What Trump did against Iran was more a war than sanctions,” Rouhani said in a cabinet meeting on Wednesday.

Rouhai also claimed that allegations against Tehran were baseless and added that the 2015 nuclear deal, officially known as the Joint Comprehensive Plan of Action (JCPOA), is a “document highlighting the fact that Iran does not seek nuclear weapons”, state media IRNA reported.

In May 2018, Trump withdrew from the deal and unilaterally reimposed sanctions on Iran.

In response, Iran gradually stopped implementing parts of its commitments to the agreement from May 2019.

Since April 6, Iran and the P4+1, namely the UK, China, France, Russia and Germany, with the indirect involvement of the US, have conducted six rounds of negotiations in the Austrian capital aimed at reviving the JCPOA.

Despite progresses in the negotiations, the parties have announced that some “serious” differences were yet to be resolved.

At the end of the latest round of talks, Iran’s chief nuclear negotiator Abbas Araqchi had said that it was the time for the parties to make their “decisions” over the remaining issues.