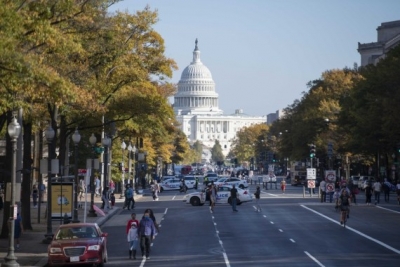 US House passes bill to boost stimulus checks to $2,000

Washington: The Democrats-held House of Representatives has passed a bill to boost the second round of federal direct payments to $2,000 for individuals, up from the $600 for individuals in the new relief package.

The vote came on Monday after President Donald Trump recently asked Congress to increase the amount of stimulus checks. After holding up the legislation for a few days, the outgoing Republican president signed the bipartisan package into law Sunday night, Xinhua news agency reported.

Following months of deadlock over the size and scope of the relief package, Democratic and Republican lawmakers finally reached a deal on a $900-billion relief plan.

The House and Senate both approved the package a week ago, along with $1.4 trillion in government funding for the rest of the fiscal year, which ends on September 30, 2021, sending the giant spending bill to the president to sign into law.

Trump, who was largely absent from relief negotiations, said in a last-second announcement that he wanted Congress to increase the amount in the stimulus checks, and threatened not to sign the bill if changes were not made.

The president asked lawmakers to boost stimulus checks to $2,000 for individuals or $4,000 for couples, calling the bill’s $600 direct payment for individuals “ridiculously low.” According to the bill, a family of four would receive up to $2,400.

The president’s call was embraced by Democrats, who have advocated for higher direct payments, but was frowned upon by some Republicans, who aimed to hold down the plan’s overall cost.

Trump, under pressure from lawmakers of both parties, eventually signed off the $2.3 spending package, averting a government shutdown and delivering aid to individuals and businesses as the the Covid-19 pandemic worsens.

Trump, however, said he expected the Congress to vote on separate legislation to increase stimulus checks to $2,000.

The House passed the $2,000 direct payments in a fast-track procedure that needed two-thirds support. But it remains to be seen whether a Republican-controlled Senate would go along with it, as many Republicans in the chamber even oppose a $1,200 check, as approved in the CARES Act in late March.