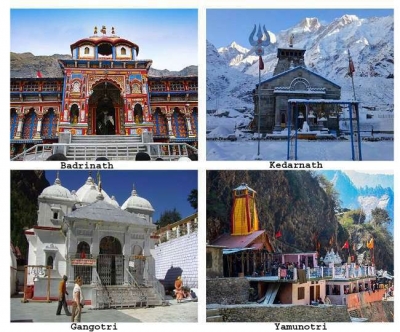 Dehradun: This time many new records have been set by pilgrims during the Char Dham Yatra so far this year. A total of more than 42 lakh devotees have visited the Char Dham shrines, all located above 10,000 feet on “fragile” mountain ranges.

So far, 15.14 lakh pilgrims have visited the Badrinath, 14.25 lakh Kedarnath, 6 lakh Gangotri and more than 4.73 lakh visited the Yamunotri.

In this Char Dham Yatra, since the last five years, the maximum number of pilgrims have also died. So far a total of 311 pilgrims have died in the yatra that began in May. Of this, 135 devotees have died while walking on foot in Kedarnath, the Uttarakhand Health Department said.

According to the Health Department, 75 per cent of the total deaths were due to pre-existing serious illnesses and sudden heart attack, while 25 per cent died due to accidents.

After two years due to the Covid-19 pandemic, this time the Char Dham Yatra has resumed without any restrictions.

As soon as the yatra started, there was a huge crowd of pilgrims visiting for worship (‘darshan’) of the diety Lord Shiva in the Char Dhams.

This time in Char Dham Yatra where the pilgrims set a new record. At the same time, the death toll on the pilgrimage routes of the four Dhams has also increased.

Health department figures show that this time 135 pilgrims have died in Kedarnath, 75 in Badrinath, 80 in Yamunotri and 21 on the route to Gangotri.

More than 180 doctors, paramedical staff were deployed for health services on the yatra routes by the government and the Health Department, but many pilgrims have also died due to heart attack while climbing on foot to Kedarnath and Yamunotri Dham.

Health Secretary In-charge R. Rajesh Kumar said that adequate doctors, paramedical staff were deployed for health services during Char Dham Yatra. So far 311 passengers have died on the yatra routes, of which 75 per cent of the deaths are due to pre-existing illnesses or heart attack.

With the increase in the number of deaths of pilgrims on the Char Dham Yatra routes, the government has directed to conduct health tests. After this, the Health department started testing the health of the pilgrims at Rishikesh, including the halting of yatra. Passengers who were not healthy were also advised not to travel.

The deaths of devotees who visited the Char Dham shrines in the last few years has increased this year. In 2017, 112 pilgrims died, while in 2018 106 passengers and in 2019 the lowest record of 91 passengers died. Although this time the Chardham Yatra has broken all the previous records, but there is still some time left for the Yatra to end.