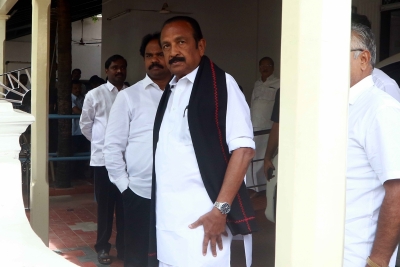 Chennai: MDMK leader and MP Vaiko on Sunday called upon the Tamil Nadu government to immediately act on the dam being constructed by the Karnataka government on the Markendeya river and take up the issue with the Centre.

Vaiko said that the construction of the dam in the Markendeya river, which is a tributary of the Pennaiyar, would affect the farming community of Krishnagiri district of Tamil Nadu and that around 870 hectares of the farmland would turn barren by this.

In a statement released on Sunday, Vaiko said that the government must act against this matter with seriousness as it would affect the lives of several people of Tamil Nadu.

The senior leader said that the Kuddappalli and Beemandapalli villages of Krishnagiri district would be totally affected by this dam as they are completely dependent on Pennaiyar river for their irrigation and drinking water needs.

Tamil Nadu Water resources Minister and senior leader of the DMK, S. Duraimuurgan, meanwhile, said that the state government has already sent a letter to the Centre to constitute a tribunal to resolve the issue arising out of the dam construction by the Karnataka government.

The minister in a statement said that the Central water commission had reviewed the work in 2017 itself and that the Karnataka government had also informed that it had built a dam of 0.5 tmcft capacity to meet the drinking water needs and to recharge the water table.

Duraimurugan in the statement said that the Tamil Nadu government had continuously opposed the construction of the dam and had filed a petition in the Supreme court in 2018 and the apex court had in 2019 ordered the constitution of a tribunal. He also said that Tamil Nadu was expecting the issue to be solved through the tribunal and added that the government will safeguard the interests of the farmers and common people who would be affected by the construction of this dam.

Political parties across the spectrum have condemned the move of the Karnataka government to construct the dam. PMK Youth wing leader Dr. Anbumani Ramadoss said that Karnataka had violated the agreement and that legal action should be taken against that government.